Working From Your Childhood Bedroom 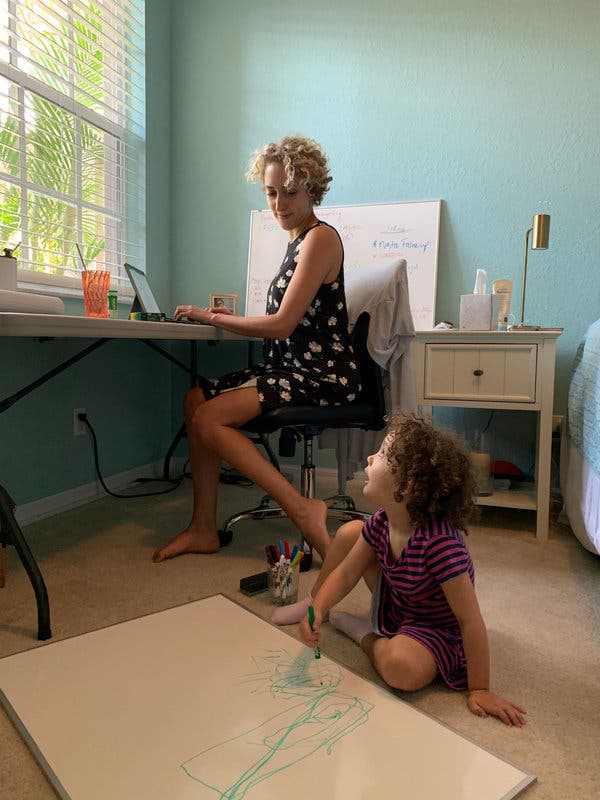 For some millennials, sheltering in place means moving home to their parents’ house.

Even before coronavirus prompted a stay-at-home order for New York City, Dana Shakarchy, 33, decided to flee her apartment on the Upper West Side for her childhood home in Great Neck.

“Being in the city, in an apartment, it feels like the risk is larger,” said Ms. Shakarchy, who works for the Jewish Federations of North America. “You are in elevators and touching things. It feels not as good as being in a house.”

She’s now sleeping in the full-size bed she had as a teenager. On the walls are posters of boy bands including ‘NSync. Next to her is her lifetime collection of stuffed animals. She’s taken work calls from the couch in the den to spare her colleagues the visuals.

“Although I just found out you can put a background up on Zoom,” she said. “So theoretically I could have done it with my stuffed animals, and they wouldn’t have even known.”

It’s been an adjustment to not have as much space and alone time, but she’s trying to cherish it. “I baked challah with my mom. She joined me for exercise,” she said. “It feels really meaningful, and I don’t want to take that for granted.”

Across the United States, millennials and Gen-Z professionals are escaping dense cities by moving back into their parents’ homes. Some feel safer outside of crowded settings or want to be close to their parents to help care for them if they fall ill. Others who have young children are turning to grandma and grandpa for help with child care. For many it feels like time has reversed or this is a special moment for them to connect with extended families.

“I looked through one of my old diaries the other day,” said Ms. Shakarchy. “That was very strange.”

Ace Heddleson, 24 and unemployed, was already sad that his parents were planning on moving out of his childhood home in Carlisle, Pa. this summer. So when the virus hit, he decided to use the opportunity to leave the house he shares with roommates in Pittsburgh to be with his parents. “We thought it would be a good time to do social isolation and help them pack the house up and get it ready,” he said.

He’s acutely aware that this will be his last days sleeping in his childhood bedroom. “It’s been redecorated to be a guest room, but there are trophies on top of the dresser and the books I read growing up on the bookshelf by my desk,” he said. “It’s kind of like a bit of closure to be here before they move.”

While he knows he has his own life in Pittsburgh, it also feels a little like a trip back in time. “I definitely feel like I am a teenager again in some way, where I feel like my every move is tracked a little bit,” he said. “I definitely think about the fact that they probably could hear my conversations if they wanted to.”

Those with young children don’t seem to care about any restrictions they now face in their parents’ home. They are just grateful for the extra help.

Carly Zimmerman, 32, who works for BBYO, a Jewish youth movement, was on a vacation visiting her parents in Bonita Springs, Fla., when coronavirus escalated. She decided it would be safer for her and her 3-year-old daughter Nora to stay. Her husband, Michael Zimmerman, is still in Philadelphia, where they live, looking after the dogs.

Ms. Zimmerman has been doing her work from a small guest bedroom in the house. “We put a plastic folding table and a chair up,” she said. “I ordered a white board, but it hasn’t come in yet.” While she’s in back-to-back meetings, her parents watch her daughter, sometimes for eight hours a day.

They read books from the virtual library, tackle art projects, walk around outside looking at nature. Ms. Zimmerman doesn’t know how she would survive this time without them. “I just feel so lucky to be with my parents, whom I have a great relationship with,” she said. “I have fantastic child care.”

Looking out on a golf course and palm trees, it can sometimes feel as if she is on an extended vacation, she said. “But when I stop and think about it, there are some anxiety-ridden moments.”

Jonathan Wasserstrum, 37, the chief executive and a co-founder of SquareFoot, which helps companies find office space, is currently living at his father-in-law’s house in Mamaroneck. With his pregnant wife due in two months, they felt it would be better to be settled somewhere with more space and with extra sets of hands.

“We set up a nursery here in case we are here for a while,” he said. “We took over an office, where we are going to set up a crib. We won’t get a new dresser, but there are already shelves where we can put baskets up.” (The only furniture item they want but won’t have is the glider they left in their Greenwich Village apartment. “It’s going to be a hassle to move,” he said.)

For Mr. Wasserstrum, living with extended family doesn’t seem so weird when he thinks about historical precedent. “Not in the past 20 years, but if you go back centuries, everybody lived right next to each other,” he said. “It’s a reversion to the norm instead of something brand-new.”