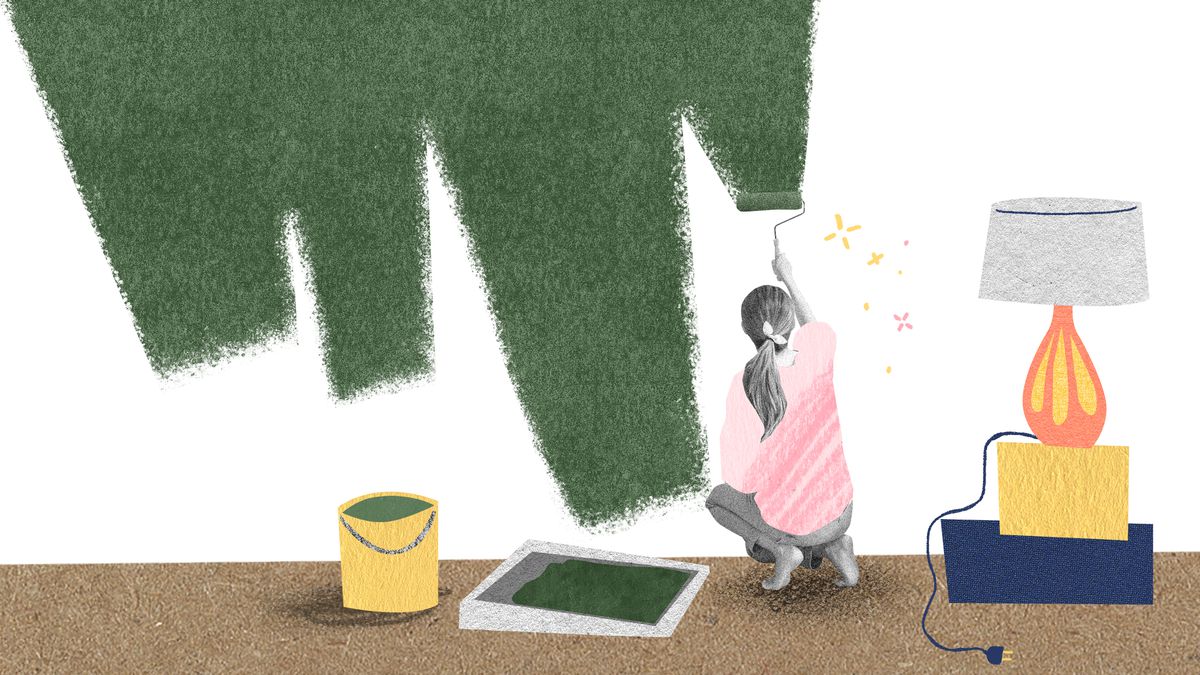 I didn’t have the resources to move out of my home, but I’d finally recovered the strength to transform it

Last summer, I watched my hometown of New York empty in dribs and drabs—and then, come August, in a torrent—as my fellow city dwellers packed overnight bags to flee the grid’s humidity for the more forgiving climates of the mountains or the beach. During my occasional forays across the river, I marveled at Manhattan’s quiet, vacant streets, striding across the pavement without worrying about bumping into a phone-glued tourist, and taking up extra space in the rows of my favorite air-conditioned, and mostly empty, movie theaters. A lifelong New Yorker, in previous years I had joined the exodus to the Catskills or Cape Cod, but last summer I barely left my Brooklyn apartment. I was consumed by a project, and that project was single-handedly repainting and redecorating my Crown Heights two-bedroom.

Inside my overheated little home, I navigated again and again to YouTube, where I studied videos with names such as “How to Paint a Wall with Brush & Roller” and “How to Repair a Plaster Ceiling.” I spent an inordinate amount of time scrolling through Home Depot’s website, where I examined virtual paint chips and compared reviews of various brands of plaster and primer. Inside my closet, my summer dresses, shorts, and tank tops went unworn in favor of paint-stained hiking pants and denim button-downs. And slowly but steadily, I assembled my toolkit: a six-foot ladder, a canvas drop cloth, rollers of various sizes and an extension pole on which to fit them, a paint scraper, a utility knife, and an angled-sash brush.

My home redo was, ostensibly, practical. Just before the summer started, my landlady had curtly informed me that she would be raising my rent by $125—a whopping 7 percent increase—that year, with additional increases of unknown size coming each year thereafter. Shocked and incensed, I trawled sites like StreetEasy to see if moving even farther east into my neighborhood—and outside the ever-expanding reach of gentrification—would allow me to continue to pay affordable rent. The answer was a resounding no: The prices of nearby apartments had skyrocketed in the eight years I’d lived in the area, with the owners of comparable two-bedrooms charging hundreds of dollars more than I’d pay even after the rent increase. I decided that if I was going to be here for a while, I might as well give my apartment a fresh coat of paint. And because my landlady had a history of using inexperienced and unprofessional handymen to maintain the apartment, I decided that I—having never patched or painted a single wall—would do a far better job than anyone she’d send my way.Each freshly painted wall, each new piece of carefully chosen art—they all helped restore order and purpose to an out-of-control life.

But the real reason that I decided to take on the job was deeper and more complicated. Since 2017, I had been suffering the symptoms of a systemic, progressive chronic illness. A bad flare last fall left me housebound with pain and fatigue, unable to leave my apartment except for occasional trips to buy groceries and toilet paper. I soon felt like a prisoner in my own space, which, though cozy and lovingly furnished, started to feel cramped, dirty, and ugly. I began to hate the putty-beige walls—unchanged since I moved in in 2011—and to question the choices I had made when decorating it that same year. Previously allergic to sites like Apartment Therapy and Pinterest, I started daydreaming constantly about home improvement.

In late 2018, after I finally found an effective course of treatment, my symptoms began to improve. Over time, I’ve returned to the land of the living, taking on part-time work, writing and socializing again, and putting together the pieces of a shattered life. But as my physical health improved, I found my emotional progress impeded by the very space I inhabited. My apartment no longer felt like home; instead, it represented the nearly six months I had spent stuck inside and fighting for my life. I couldn’t look around without being reminded of some trauma of the Great Sickness; my bedroom, in particular, inspired a sort of nauseated dread. When my landlady raised my rent last summer, it felt like a type of divine intervention. I didn’t have the resources to move out of my former sick den, but I’d finally recovered the strength to transform it.

And so I began collecting the supplies. And watching the videos. I chose a light linen-gray paint for the main rooms and a sunny yellow shade for the bathroom. Starting in the master bedroom and working my way south, I spackled and sanded holes and dents, primed, and then painted. I spilled paint and cleaned it up; I made a few mistakes and corrected them. As I moved through the apartment—ferrying the ladder around while I blasted soul music and comedy podcasts—I took down almost every piece of art, wrapped it in bubble wrap, and stashed it in the closet. I replaced my ancient, fraying antique couch with a plush velvet one that’s much more comfortable. I commissioned a weaving from an artist I found on Instagram and another, smaller one from a friend of a friend; I ordered prints of photographs taken in Oaxaca, Mexico, where I lived just before the illness struck, from a friend I had met there; I repaired a broken stereo, hung grow lights, and scattered new plant babies all around. Having been disabled for the better part of a year, I didn’t really have the budget for any of this, but it was cheaper than moving, so I made it work, slashing unneeded Amazon purchases, frequent movie nights, and restaurant meals.

Throughout the repainting process—which took me more than four months as I worked, alone, around symptoms and job obligations—I was (and still am) going through the healing process. But even on days when I felt weak or tired, I got some small task done, whether that task was stripping the paint from a closet door or, on a more symptomatic day, replacing a light fixture. And each job that I was able to do—after many moons of not doing any work at all—made me feel capable and strong, like I used to be. Each freshly painted wall, each new piece of carefully chosen art—they all helped restore order and purpose to an out-of-control life.

A couple months after redoing my apartment, I celebrated completing the first year of the three-year treatment I’m undergoing to restore my health. Healing is an ongoing process, but today I have more good days than bad. I’m now able to leave my apartment as I please, and each time I set foot outside still feels like a victory. But as winter sets in and the nights grow cold, I find that, more often than not, inside is precisely where I want to be—on my new couch, with my two old cats, taking refuge in a space that was once a prison but is now a home.