Why Rem Koolhaas Brought a Tractor to the Guggenheim 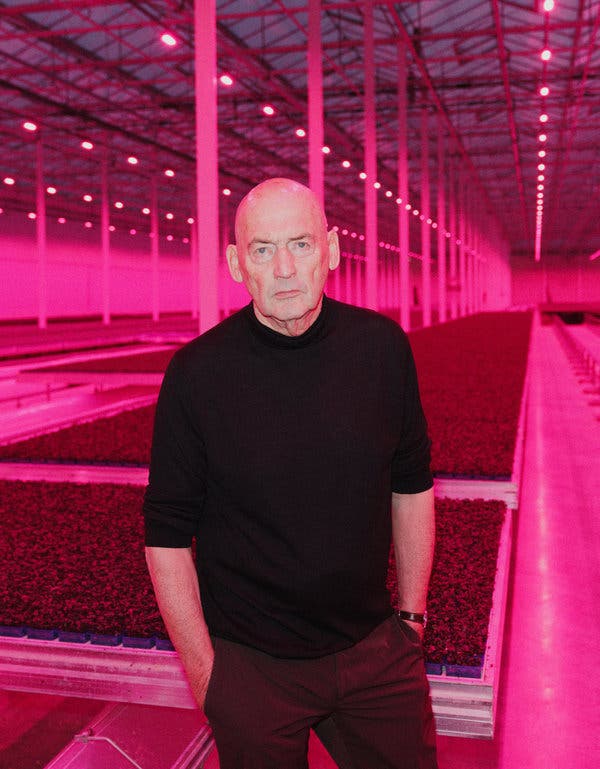 The architect, a champion of cities, now turns a spotlight on the countryside in a sprawling new exhibition about the other 98 percent of the world.

THE HAGUE — A manifesto and love letter to the city in the 1970s, the book “Delirious New York” helped propel the reputation of a young, restless Dutch journalist-and-screenwriter-turned-architect.

Nearly forgotten now, a display of drawings accompanied the book in 1978 — real and also wonderfully imaginary views of the city by the author, Rem Koolhaas, and his colleagues at the Office for Metropolitan Architecture, or OMA, the architecture firm founded a few years earlier by him, Madelon Vriesendorp, Elia and Zoe Zenghelis and Zaha Hadid to develop what they called “a mutant form of urbanism.”

“The Sparkling Metropolis,” as the show was called, occupied what then doubled as storage rooms at the top of the spiral of the Guggenheim Museum. “The irony wasn’t lost on me,” Mr. Koolhaas remembered the other day, about the fact that Frank Lloyd Wright, the Guggenheim’s architect, hated cities.

We had gotten together in the Rotterdam offices of OMA. I had come to the Netherlands to talk with Mr. Koolhaas about the new Guggenheim exhibition he has put together — a bookend to “Delirious New York” and, in a sense, to his career.

We’ll see how the show, “Countryside, The Future,” opening Thursday, is received during its six-month run — whether museumgoers find it exhilarating or shambolic. I’ve only seen it half-installed. It looks to be a huge, text-heavy, dizzying affair with something of the aesthetic of an old Soviet World’s Fair pavilion, spilling out of the Guggenheim’s front door, where a tractor, remotely operable by iPad, is now parked on Fifth Avenue.

A corrective to the focus on growing cities, “Countryside” aims to turn a spotlight on the 98 percent of the planet not yet occupied by cities. Anticipating the obvious criticism, Mr. Koolhaas describes the show as a “pointillist” portrait, a “global sampling” of “the current condition of ‘countryside,’” which he acknowledges seems “a glaringly inadequate term for all the territory that is not urban.”

By not-urban territory, in other words, Mr. Koolhaas means farms and wilderness and oceans and villages — the Kalahari, the Great Barrier Reef and the Dakotas — but also dense exurban clusters of high-tech industrial sites and mega-campuses for Amazon fulfillment centers and Tesla giga-factories in places like the high desert outside Reno, Nevada.

The show pings from urbanizing villages in Kenya along Chinese-funded train routes, to endangered communities in Siberia where climate change is hastening the melt of permafrost.

And a bay in the Guggenheim rotunda is devoted to Iraqi, Syrian and other immigrants resuscitating ghost towns like Camini, in Calabria, Italy, and the village of Manheim, near Cologne, Germany.

Years in gestation, the show is the collective output of an army of collaborators and students. Troy Conrad Therrien, the Guggenheim’s curator for architecture, brought Mr. Koolhaas onboard in 2015 and oversaw the project’s development. Among many others, Mr. Koolhaas teamed with Samir Bantal, who runs AMO, the research arm of OMA, and Niklas Maak, the excellent German architecture critic. Graphics for the museum layout and for the dense, palm-size catalog are by Irma Boom, the great Dutch book designer. The catalog’s size is a kind of inside joke. Mr. Koolhaas is famous for producing doorstops.

He takes no clear political position on many of the hot-button topics the show raises, portraying himself as a reporter not pundit, realist not cynic, equally amazed and appalled, refusing moral judgments or virtue signaling. A familiar pose by him, it may confuse some, frustrate others. The topics evolved out of “a personal journey, where our energies led us,” he told me.

They led to places like Koppert Cress, which Mr. Koolhaas invited me to see. It’s part of the industrialized sprawl of car dealerships, highways and factories just outside The Hague, the opposite of what most people would call the countryside. The Netherlands, it turns out, is the world’s second largest exporter of food because of its state-of-the-art greenhouses — businesses like Koppert Cress, a high-tech producer and supplier of micro-vegetables, whose facility is the size of 23 football fields.

The company’s pony-tailed owner, Rob Baan, greeted us at the door. In a hothouse off the lobby he fed us samples of tiny chrysanthemums, shiso leaves and a flower whose name I failed to catch that he said was used in toothpaste, which instantly anesthetized my mouth for several troubling minutes.

Mr. Baan then led us through airlock doors into the iridescent greenhouses.

A dozen-odd years ago, the United Nations announced that this is the first urban century, the first time more than half the world’s population lives in cities. Predictions were that some 70 percent of humans will be urban-dwellers by 2050.

Having been left for dead a generation ago, cities suddenly became the next big thing. Books and biennials about cities flooded the architecture world. As Mr. Koolhaas says, the focus on urbanism “gave people the right to ignore the countryside,” incubating a “reservoir of indignation” — although it’s not quite clear whom he means by people. The people who turned out for Trump and Brexit certainly never forgot about themselves.

Along which lines, this is the sort of show that may invite charges of slumming by a world-famous architect who, it is said, often gives off the imperious, slightly impatient impression that he has something better to do. At 75, tall and imposing, given to a uniform of gray and black slacks and mock turtlenecks, he can seem almost comically restless. When I chat with his friend Ms. Boom, a warm, exuberant character, before we all head out for a Japanese dinner in Amsterdam, he paces her house like a caged tiger.

He can be gruff, too, but also solicitous and generous, amusing like his prose, with a seemingly depthless appetite for new ideas and people. It says something that OMA has been an incubator for so many gifted architects.

The firm has a lot of other people overseeing projects around the world these days, which has left Mr. Koolhaas more time to ponder the Guggenheim exhibition. He traces the roots of the exhibition to walks that he took years ago around the Swiss village near St. Moritz where he and his partner and sometime collaborator, the British-born Dutch architect Petra Blaisse, used to holiday. He noticed the population dropping, the town growing; cows, horses and farmers giving way to immigrant domestic workers from Southeast Asia and absentee owners from Milan who spent millions of euros converting old barns into minimalist villas.

He identified gentrification, in other words. This is what piqued his interest in the other 98 percent.

“Yes, there is something inherently ridiculous about suddenly realizing the rest of the world exists,” he admits. But he says he learned years ago from a journalistic mentor to approach new situations as if he were a Martian, with an innocence that may appear clueless but also lets one notice what others no longer see because it has become too familiar.

Mr. Therrien, the Guggenheim curator, puts it this way in the catalog: “The countryside has long — always? — been chock-full of experts, overflowing with opinions, flooded by interpretations. But Martian strategy is necessarily unimpressed. Even the duly picked-over can be a rich harvest. Calling it ignored is not ignorant, it’s strategic. It’s an opening.”

That’s the hope, anyway — that “Countryside,” whatever criticism it provokes, ignites debate, gets people to think about developments and places that demand attention because city and country, urban and rural, are ultimately not separate issues. The show includes no buildings by OMA. The designer of the Seattle Public Library and the national library in Qatar, among other recent landmarks, makes clear that this exhibition is not about his architecture.

It’s useful to remember that Mr. Koolhaas started out his working career writing for a weekly in The Hague, honing a journalist’s curiosity and detachment and penchant for pronouncements. He fell in with a faction of the Dutch avant-garde that wasn’t so much political as ironic, camp, modernist; and like his father, he also wrote screenplays, including a film noir and an unproduced script for Russ Meyer. Montage became a motif running through his books, exhibitions and buildings.

“Countryside” unspools along the rotunda montage-style, ideas and eras speeding by, figures unearthed like the German architect Herman Sörgel who, during the 1920s, cooked up a scheme to link Africa with Europe by lowering the Mediterranean 100 meters, irrigating the Sahara and installing new hydroelectric dams in Gibraltar and Suez to power the new continent, which he called Atlantropa.

Atlantropa appears in the show alongside Stalin’s and Mao’s megalomaniacal plans for remaking the countryside, and also with the Great Green Wall, the African Union’s current and far more benign attempt to transform a 4,700-mile-long, transcontinental swath of desert into arable land.

“In the future, the countryside can’t only survive as back of the house for people who live in cities,” as Mr. Bantal put it to me. “It’s also a cause for optimism, a place of invention and opportunity.” He pointed to the show’s section on pixel farming, a nascent technology that holds out the prospect for what he called “perfected nature,” and to reborn towns like Manheim, which suggest that the countryside is not dying but supple and nimble and can, selectively, be reinvented in ways that cities, increasingly programmed and homogenized, can’t.

Through those airlock doors at Koppert Cress, the greenhouses looked like something out of “Ad Astra”: silent spaces the length and breadth of New York avenue blocks, their atmosphere monitored like operating theaters, plants stretching as far as the eye could see in gridded rows beneath red, green or white lights. In the room of plants enveloped by a Dan Flavinesque pink light, I asked Mr. Koolhaas whether he found the greenhouse peaceful or stressful.

“Definitely stressful,” he said, then added, “and fantastically beautiful.”

Places likes these are Mr. Koolhaas’s big architectural reveal in “Countryside.” What he calls “post-human” buildings — whose boredom he finds “hypnotic” and “banality breathtaking” — represent, he says, a “new sublime.”

He is referring to the expanding universe of data collection hubs, storage hangers and other digital-era behemoths that, like Koppert Cress, are reshaping the hinterlands. Designed by codes and algorithms, not human inspiration, industrial facilities on this scale, once upon a time, employed hundreds or thousands of workers. Now, like Koppert Cress, they’re staffed by two dozen or so, with implications that “Countryside” doesn’t get much into.

For Mr. Koolhaas, the architecture is, like 1970s New York, a kind of revelation, calamity and unfolding experiment. A new manifesto.

“To drop the connection between humanism and architecture is of course extremely frightening,” Mr. Koolhaas tells me when we leave Koppert Cress.

“But it is also exhilarating.”

Michael Kimmelman is the architecture critic. He has reported from more than 40 countries, was previously The Times’s chief art critic and, based in Berlin, created the Abroad column, covering cultural and political affairs across Europe and the Middle East. @kimmelman