Where Does the House End and the Yard Begin? 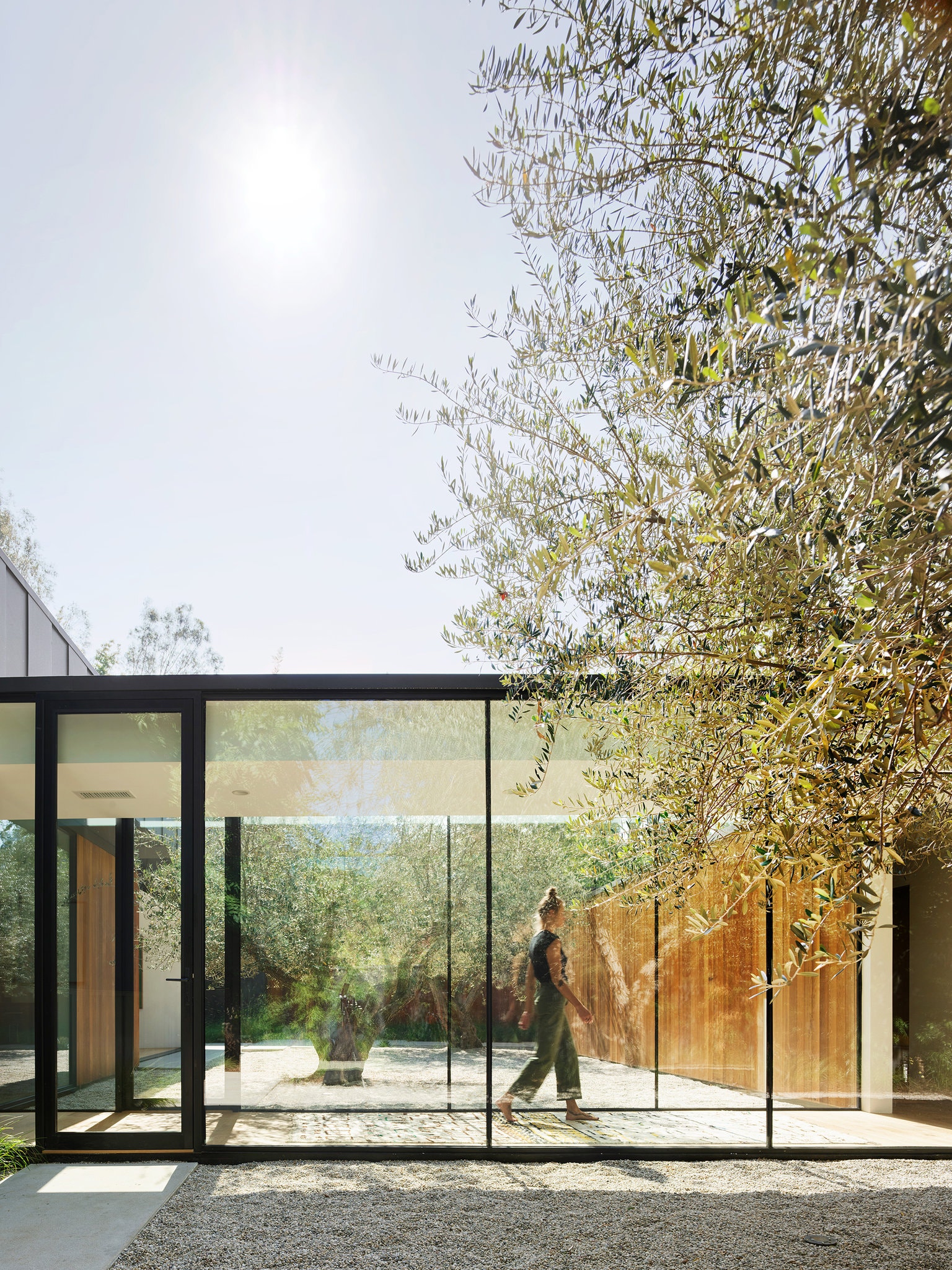 In one Los Angeles home, it’s difficult to tell. And that’s the way the owners like it.

At David and Jamie Thompson’s house in the Studio City neighborhood of Los Angeles, it’s easy to lose track of where the house ends and the yard begins.

The 5,380-square-foot home, which Mr. Thompson, the founding principal of the Los Angeles-based architecture firm Assembledge, designed for his family of four, is three separate pavilions connected by glass walkways, with enormous glass doors that slide open to connect the interior rooms to a mosaic of courtyards and gardens. One pavilion contains the main living spaces, another the primary bedrooms and the last a guest suite and garage.

“We’re really using the perimeter of the property as the exterior walls,” Mr. Thompson, 50, said. With a courtyard of mature olive trees, old oaks, walkways lined with tall grasses and a pool, the property has become “this little private oasis, right smack in the middle of an incredible urban city,” he said.

Indoor-outdoor living is nothing new in Southern California, but at the Thompsons’ home, the concept is exaggerated.

“Unlike many iconic Los Angeles houses that orient themselves around these panoramic city views, this house is really more about this inwardly focused experience,” Mr. Thompson said.

Creating that private oasis required years of patience and planning.

Mr. Thompson had previously designed and built a house in the Larchmont neighborhood of Los Angeles shortly after the arrival of the couple’s first daughter, Lyla, now 15. They loved that house, but as the years went by and they welcomed a second daughter, Zoe, now 12, the 2,400-square-foot structure, which sat on a 5,000-square-foot lot, began to feel cramped.

The yard was so tight that “David would end up standing in the street, throwing the softball back and forth with the girls out in front of our house, which was all glass,” said Ms. Thompson, 52, a real estate agent. “There were so many hazards involved in that, between traffic and a wild pitch.”

By 2014, it was time to move on. After a search, they found a 1956 bungalow on an 18,000-square-foot lot in Studio City. The house was just what they wanted: dated enough that they wouldn’t feel guilty tearing it down, yet sound enough that they could live there for a few years while they went about selling their old house and saving up for a new construction project.

They closed on the home for $1.8 million that October and moved in.

“It was that proverbial worst house on the block,” Mr. Thompson said. “And it was literally falling apart around us.”

The arrangement lasted about two years, until one rainy night when Mr. Thompson finished setting up a series of buckets to catch leaking water in the family room, only to retire to the master bedroom and find another leak there.

“It was the last straw,” he said. In January 2017, the family moved out and called in the demolition crew.

Waiting so long to begin construction was largely a financial decision, but it also gave the Thompsons time to understand their property better and to fine-tune their plans.

“It afforded us the opportunity to live in the space and really sense the lot, how we lived in the house, where the light was and what we enjoyed about it,” Ms. Thompson said.

That, in turn, informed Mr. Thompson’s approach to planning space. He aimed to recreate elements of the original house that they liked, including the way visitors passed through an intimate courtyard to arrive at the front door from the street, while introducing new features like an expanded kitchen connected to an open family room, which serves as the hub of the home.

He finished the exterior of the house with a supersized take on board-and-batten siding, completed with charcoal-colored cement board, which appears to be cut away in sections to reveal western-red-cedar paneling and glass.

To design the outdoor spaces, he called on his friend and frequent collaborator Michael Fiore, of Fiore Landscape Design. Mr. Fiore not only helped plan the plantings, pathways and firepit, but also sent the Thompsons to visit an olive farm in Visalia, Calif., to select three 85-year-old olive trees in person.

For the interiors, the Thompsons collaborated with another friend, Susan Mitnick, an interior designer. The goal was to make the house “very modern, but very warm and accessible,” Mr. Thompson said. “We wanted it to be less about a style, and more about a lifestyle.”

Ms. Mitnick helped them achieve that, he said, by advising on natural materials, colors and textures that would soften the architectural envelope.

By the time the Thompsons moved in this past summer, they had spent about $1.5 million, and it was money well spent, Ms. Thompson said.

“It is the most beautiful house I’ve ever lived in,” she said, adding that each day brings a pleasant new surprise. “It’s like a kaleidoscope sometimes, just with light and shadow, and nature.”

And with so much space to spread out, Mr. Thompson said, “we have approved it for softball.”