The Many Moods and Pleasures of Donald Judd’s Objects 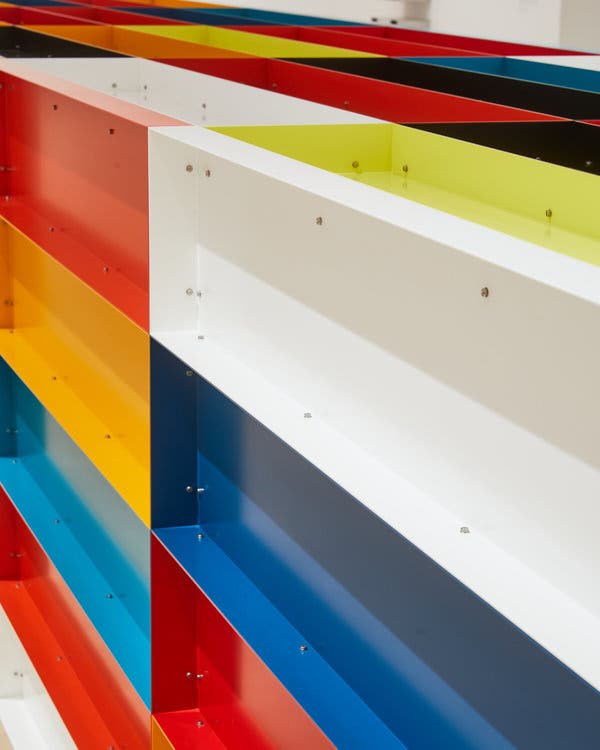 There is a beautifully complex language of materials to savor in a survey of the artist’s work at MoMA. It’s his first U.S. survey in over 30 years.

I wonder if it even occurs to young artists in the globalist, pluralist present to try to stake out a spot in art history by changing the way history goes. Donald Judd, pioneer of the 1960s movement called Minimalism (the label wasn’t his; he hated it), thought about this constantly. He wanted, right from the start, to be a big art deal, a super influencer. Long before his death in 1994, at 65, he was.

Major American and European museums owned his work. His signature sculptural image — a no-frills, no-content wood or metal box — had not only been adapted by other artists, but also riffs on it became a fixture of international architecture and design. To some degree, we all lived in Judd-world, and still do.

Yet over time, Judd himself seems to have retreated from view. The survey of 70 works that opens at the Museum of Modern Art on March 1 is the first in New York in more than 30 years. It’s a fine show: carefully winnowed, persuasively installed, just the right size. Its one-word title, “Judd,” suits the artist’s view of his wished-for, worked-for place in history: so assured as to need neither qualifiers nor explanations.

The big, and maybe only surprise, particularly for Judd skeptics, is how really beautiful some of the art looks, how poetic, and mysterious. These were qualities that Judd himself, at least when he was starting out, would not have wanted applied to his work, which in the 1950s was painting. Beauty and mystery belonged to the art of yesterday. His was an art of today, a today that he kept close tabs on as a busy New York art critic in the late 1950s and early 1960s.

Writing led him to network widely in the contemporary art world. It allowed him to observe its career-making machinery in action, and to consider how to position himself within it. His reviews — listy, pontificating, proscriptive — were a form of self-advertising that also served as a useful means of self-critique.

Through evaluating the work of hundreds of other artists, many his generational peers, he came to see that his own paintings — two examples introduce the MoMA show — were not, and would never be, strong enough to take him in the history-making direction he aspired to. He had to go another, less conventional way, and around 1960, he began to make work that was like no other art around.

It was three-dimensional, so it wasn’t painting but, he claimed, it wasn’t sculpture either. He called the new works “specific objects,” and left it at that. He titled all of these objects “Untitled,” and insisted they were devoid of metaphors, personal data or real-world references — all the lures, in other words, that art traditionally uses to draw us in.

The earliest of these experimental objects look pretty funky. From 1961 comes what is essentially an all-black oil painting with a baking pan sunk into its surface. An oil-paint-mixed-with-sand picture, dated to the following year, is colored allover scarlet red and has a yellow plastic “O” — a found bit of commercial signage — sideways in its center. Almost every subsequent piece for the next few years is the same red. Judd said he chose the color because it made edges look crisp. He didn’t mention that it also shouted “Look at me!”

For some observers, the most interesting thing Judd was doing at this early point was playing with space, in unusual ways. A largish 1963 work composed of iron flanges (Hardware store finds? Junk shop rescues?) attached to a flat wood panel, simultaneously hugs the wall, painting-style, and curves out into the room. And a smaller wall piece from the same year offers a preview of further complexities to come.

About the size of carpenter’s plane, it consists of a shelflike unit holding a length of square pipe. They seem to form a single dense, even leaden unit. Yet two small holes cut into the “shelf” hint at interior space, and a view from the side reveals the pipe to be hollow and open at both ends. Suddenly the piece feels light and buoyant. Air is moving through. You can almost feel it.

Then a more radical development arrived: Judd stopped making hands-on art. Most of the objects in the retrospective’s first gallery were constructed and painted by Judd, with assistance from his father, who was a carpenter. Then in 1964, he hired a commercial sheet-metal workshop in Queens called Bernstein Brothers to fabricate his work, and it would continue to do so for years.

This came at a time when Abstract Expressionism that most touchy-feely of styles, remained the model of what serious art should be. Judd took critical heat for shifting production from his studio to what people assumed to be a factory. But in reality, his creative involvement with his art stayed intense. All the work was based on his detailed drawings. (Several are on view.) Indeed, drawing designs became one of his chief occupations. In addition, he chose the material, much of it industrial (metals, Plexiglas, acrylic paint), to be used for new work, and he often oversaw, or consulted on details and production. For a hands-off artist, he was very much on the job.

It is the art produced by this combination of authorial presence and absence that makes up the bulk of a retrospective — organized by Ann Temkin, MoMA’s chief curator of painting and sculpture, with Yasmil Raymond, former associate curator; Tamar Margalit, a curatorial assistant; and Erica Cooke, a research fellow — that spans more than 30 years. In the second gallery, where industrial fabrication starts, we get a full range of what will be repeated Judd forms. There are round-ended metal wall pieces shaped like bolster pillows, and sets of thin, squared-off uprights reminiscent of high-jump bars. The little 1963 shelf-and-tube piece reappears in larger, more elaborate versions, its horizontal air shaft intact. And there are boxes, many, open and closed, foursquare and flat, single or multiple, floor-bound or attached to the wall and stacked up, one over the other, high.

A number of these objects come with what might be called special effects, not necessarily noticeable on a quick pass-through. A wall-climbing stack of stainless steel and yellow Plexiglas boxes generates a mini Niagara of light. Another, composed of gleaming copper radiates a tawny mandorla. A tall stack of boxes, its units blue-painted iron, casts shadows, and gives its side of the gallery a twilight tinge. Judd’s supposedly unexpressive art has many moods.

It also has an interior life, or lives. A floor box built of opaque honey-gold Plexiglas appears to have a dark form sealed inside. A row of four aluminum boxes spaced close together across the third gallery looms like a barrier wall. But peer into either end and you’ll find that the boxes are hollow and form a long corridor colored a subaqueous blue.

And there’s the complex language of materials to savor, most industrially sourced. In the 1970s, commercial plywood caught Judd’s eye and he used it in a suite of boxy sculptures that look like a cross between shipping containers and anchorite cells. In addition, the unpainted sheets of wood chosen are rich with organic patterning: flamelike grains, knots like eyes. They exemplified an aesthetic of accident he relished.

In the 1980s he temporarily redirected his fabrication jobs to a firm in Switzerland. He simultaneously introduced a rainbow of harlequin colors — forest green, marigold, pink — to aluminum sculptures, as if circling back to the kooky roseate punch of his earliest objects, the ones that came from his own hands.

By the time his late work appeared, he had long since assumed identities he both did and didn’t want. He had become a textbook historical figure, but also part of a past that many young artists either didn’t know about or didn’t need. When he died, elements he had tried to scour from his art — narrative, personality, emotion — were being re-embraced. Much of his late writing feels angry and bitter, partly, I suspect, because he knew he was no longer shaping the news.

He still isn’t on any center stage. As a model for young artists now — in an art world that acknowledges multiple histories and has zero interest in “isms” — he seems locked in another time, as do many of his contemporaries who came of age more than a half-century ago. Simply put, they lived on a smaller art planet, one small enough to have faith in a Next Big Step. In the market-managed present, it’s hard to imagine ever thinking that way.

But it’s good to have him back in the spotlight at MoMA and elsewhere. (Several smaller New York exhibitions have been scheduled to complement the retrospective show.) And it’s nice to report that in important ways he still is news. His art once thought to be too severe to be beautiful (or maybe to be art at all) can now be seen to offer pleasures, visual and conceptual, that any audience with open eyes, can relate to, and that young artists can even maybe shoot for. Judd the critic once said that for art to matter, “it needs only to be interesting.” His is.

Several galleries are offering shows related to the artist.

Judd Foundation: In conjunction with the MoMA retrospective, Judd’s former loft and working space will operate an expanded visit schedule from March 1 — July 11, at 101 Spring Street. It will also display 20 woodcut prints that Judd made in 1992 that have never been exhibited in New York. juddfoundation.org.

Salon 94 will be hosting a presentation of Donald Judd Furniture at the New York edition of TEFAF, May 8-12 at the Park Avenue Armory. Correction: Feb. 28, 2020

An earlier version of this article misidentified the location of the Bernstein Brothers workshop. It was in Queens, not Manhattan.

Holland Cotter is the co-chief art critic. He writes on a wide range of art, old and new, and he has made extended trips to Africa and China. He was awarded the Pulitzer Prize for Criticism in 2009.