The Extravagance of Less 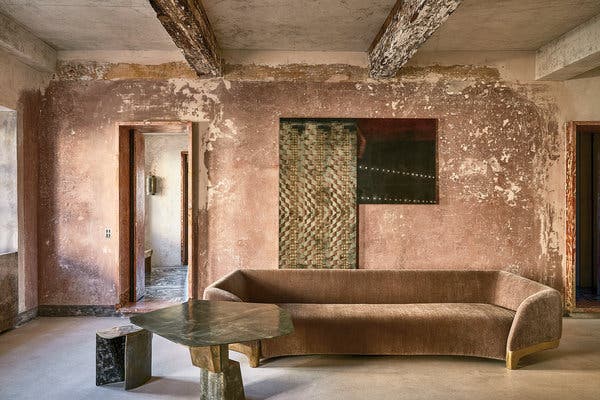 In a tiny seaside Tuscan village, a minimalist architect and designer proves that living with little but history can be the richest existence of all.

“IT’S NOT SO easy to live in my houses,” says the Italian artist and architect Vincenzo De Cotiis. Known as both an interior designer for his austere renovations (often of centuries-old palazzi) and as a furniture and object designer, the 61-year-old De Cotiis has a youthful rebelliousness in person that seems to contradict the seriousness of his work.

But everything about De Cotiis’s life speaks to his devotion to an extreme personal aesthetic. Wearing black skinny jeans, black leather boots and a tuxedo jacket, he appears both severe and at ease; so, too, does the space we are standing in, the second-floor living area of the weekend home he shares with his wife, Claudia Rose, in Pietrasanta, a Tuscan seaside village. The couple spent the last two years renovating this 5,500-square-foot four-floor early 18th-century villa, and this 23-foot-square room embodies the singular way they’ve chosen to live. The furnishings, all from De Cotiis’s handmade line, include little more than a pair of rigid, almost cruelly unwelcoming cast-brass chairs; two six-foot-tall brass-and-glass-tube lamps that might be coat racks — or torture devices — from the year 3020; a meteorite-like mixed-material vase that’s the height of a toddler, atop a low, recycled fiberglass-and-stucco coffee table; and a pair of small, iridescent recycled-glass side tables (which are, along with the chairs, prototypes from his newest line, Éternel) that echo the oceanic hue of the custom-dyed mohair sofa. Though these pieces, with their sinuous curves, metallic finishes and seamless blend of sheen and distress, appear futuristic, De Cotiis is, in fact, inspired largely by Italy’s design past. His work alludes to the high-low experiments of Modernists such as Gio Ponti and Carlo Scarpa, incorporates both classic materials (Murano glass, local marbles) and sustainable ones (recycled fiberglass from decommissioned boats) and pays homage to the handcrafted ornamentation born of the Impressionist and Baroque movements.

This marriage of tradition and the avant-garde can be seen as well in the house’s off-white plaster walls, which in certain places have been layered with new textures and patinas and in others have been carefully repaired to their once ornate glory to highlight their original details — a combination that speaks to the designer’s ability to find the liminal space between faithful restoration and contemporary interpretation. The nearly 20-foot plaster living-room walls, which leave a chalky dusting on dark clothes, are punctuated by three 4-by-4-foot frescoes of classical buildings and landscapes that were original to the house and have been restored so that they still appear centuries old. Above those are a half dozen or so original cast-plaster reliefs of laurels and lutes, and above them, the refinished vaulted ceiling. Disrupting all this exacting renovation is a six-foot-long abstraction — “Intersection Pietrasanta” (2019) by the German artist Felix Schramm, in navy and white plasterboard and wood — that resembles a lightning bolt crashing through the ceiling, threatening all who dare stand beneath it. It is not only one of the few artworks in the home but also one of the few objects of any kind, and one of the rare elements in the building that wasn’t designed by De Cotiis.

No one would ever describe the house as friendly or cozy, and yet De Cotiis has of late become increasingly in demand, having recently completed a renovation for Milan’s Straf hotel as well as private residences throughout the world. “My clients know my style, so it’s their decision,” he says, with a laugh. “It’s very, very important that we don’t have objects throughout the house,” adds Claudia Rose, who serves as the C.E.O. of their company. “Sometimes I think I’m more of a minimalist than my husband.”

THOUGH THE COUPLE and their 15-person architecture studio are based three hours north of Pietrasanta, in Milan (there, their palazzo in the Corso Magenta district feels slightly warmer, with a few more personal touches than this weekend retreat, including a sumptuous dressing room and antique bronze statuary), they travel frequently so De Cotiis and his artisans can collaborate with glassware factories in Venice, marble quarries in Tuscany and boatyards in the Marche region. It was a few years ago that the couple decided to find a weekend retreat in Pietrasanta, which, despite being in the chic coastal region of Versilia, is a one-piazza town. If bustling Forte dei Marmi, just to the west, is more akin to East Hampton, then this stretch of Tuscany is Montauk, with unassuming summer residents who have included over the years the late Polish artist Igor Mitoraj and the American-born sculptor Helaine Blumenfeld. They, like the De Cotiises, have carried on a tradition established during the Renaissance by Michelangelo, who regularly visited Pietrasanta to quarry marble on nearby Monte Altissimo for his work.

The De Cotiis villa is in the middle of town, hidden behind a stucco wall and a facade covered by wisteria, wild grape and jasmine vines. The foundation dates to the 13th century, when it was part of a salt warehouse, but the current structure was erected more than 400 years later as the country home of a Pietrasanta-born painter named Antonio Digerini; after his death in 1889, the property was passed down to his sons and later donated to Cardinal Pietro Maffi, who used it as a Catholic assembly hall. At one point, it became a hotel, and briefly a cloister, but the house sat empty for decades until the De Cotiises, having noticed it on prior trips, bought it in 2018.

The building was a wreck; the plaster floors and walls had been worn nearly to dust after decades of neglect. But this was a good thing for De Cotiis, who cultivates distress: His interiors often enshrine crumbling wooden beams and gashed or scratched walls that contrast with polished white onyx thresholds and travertine floors. He works with ancient interiors as an Impressionist might an underpainting, using the unerasable layers of chaos, destruction and re-creation as contrasts to his own additions and reconfigurations. Fortunately, many of the structure’s most captivating features were salvageable, including the wrought-iron balconies near the ceiling of the entryway from which musicians once played violins during dinner parties, a carved white marble spiral staircase and a domed 25-foot ceiling, with intricate plaster moldings, in what now serves as the master bedroom. De Cotiis also kept most of the plaster ornamentation throughout, which has become stained by time and thus more atmospheric over the years. “There is an intellectual connection,” De Cotiis says, rubbing his hand across one of the hallway friezes, “between my design, which is contemporary, and these elements — or materials or shapes — taken from an older time.”

This being Tuscany, many of De Cotiis’s interventions involve local marble, mostly swirly gray-green cipollino apuano or ghostly beige breccia, which he sourced from five quarries to produce a jigsaw effect, with the different shades and vein patterns colliding against one another. To improve the flow of the second-floor living area, kitchen and master suite, he framed doorways in creamy French marble. The master bathroom is dense with cipollino, from the floor to the blocky double vanity to the interior of a 5-by-5-foot shower cube that floats in the center of the room like a Donald Judd installation.

De Cotiis’s commitment to cipollino, which he considers among the world’s most poetic and otherworldly stones, as well as his disregard for conventional spaces, is best displayed in the kitchen. Here, almost everything, from the dishwasher to the refrigerator to the range to the dining table, is skinned in the marble. This transforms what would be a humdrum wall of appliances into a monolithic canvas of rippling waves — but unless you know exactly where to, say, press on the wall to open the dishwasher, you’d probably never find it. “True beauty is found in the parts you cannot see,” De Cotiis has said about his furniture-making methods (his preternaturally smooth joinery has long been a subject of awe and curiosity in the design world). And even for elements too big to be made of heavy marble — a massive hanging trapezoidal range hood, for example — De Cotiis refused to compromise the unity of his vision, instead employing a sort of Renaissance sleight of hand: dyeing, gessoing and sanding Belgian linen to mimic the stone’s pattern. “I don’t like kitchen design usually, but there’s a romance to this one,” he says.

ON THE BUILDING’S third level, the pale plaster and intense marble that define the bottom floors give way to a large room intended for entertaining, with pocked, rust-colored walls and worn wooden beams, some of which have been covered with treated fabric panels, lending the paradoxical feeling of being inside a sumptuously appointed attic; the 600-square-foot space recalls De Cotiis’s early days spent experimenting in 1980s-era Milanese lofts, where he developed his taste for industrial interiors.

The room’s design was also informed by the building’s past as a nunnery: With its darker palette, lower 11-foot ceilings, portico windows and neighboring wood-beamed guest bedroom, the space is, as Claudia Rose calls it, “luxury monastic.” In that spirit, De Cotiis installed a narrow 21-foot-long table of French rouge de Vitrolles marble with an inset electric range, the idea being that, as in the convents of centuries past, guests might stay for a few weeks, finding everything they need. The couple plans to invite friends and artists they admire or with whom they’ve collaborated to visit the villa and, as they ready themselves for a return to the real world, perhaps leave behind a piece of work, adding their mark to the place’s raw beauty. “In Italy, there’s always been this concept of salotti,” she says. “A cultural center, but in a realistic sense, with a true aesthetic.” It’s a reminder that what is rare needn’t be precious; a house is for living in, of course, but it’s also a palimpsest, a space on which every occupant, no matter how brief his stay, leaves his signature.