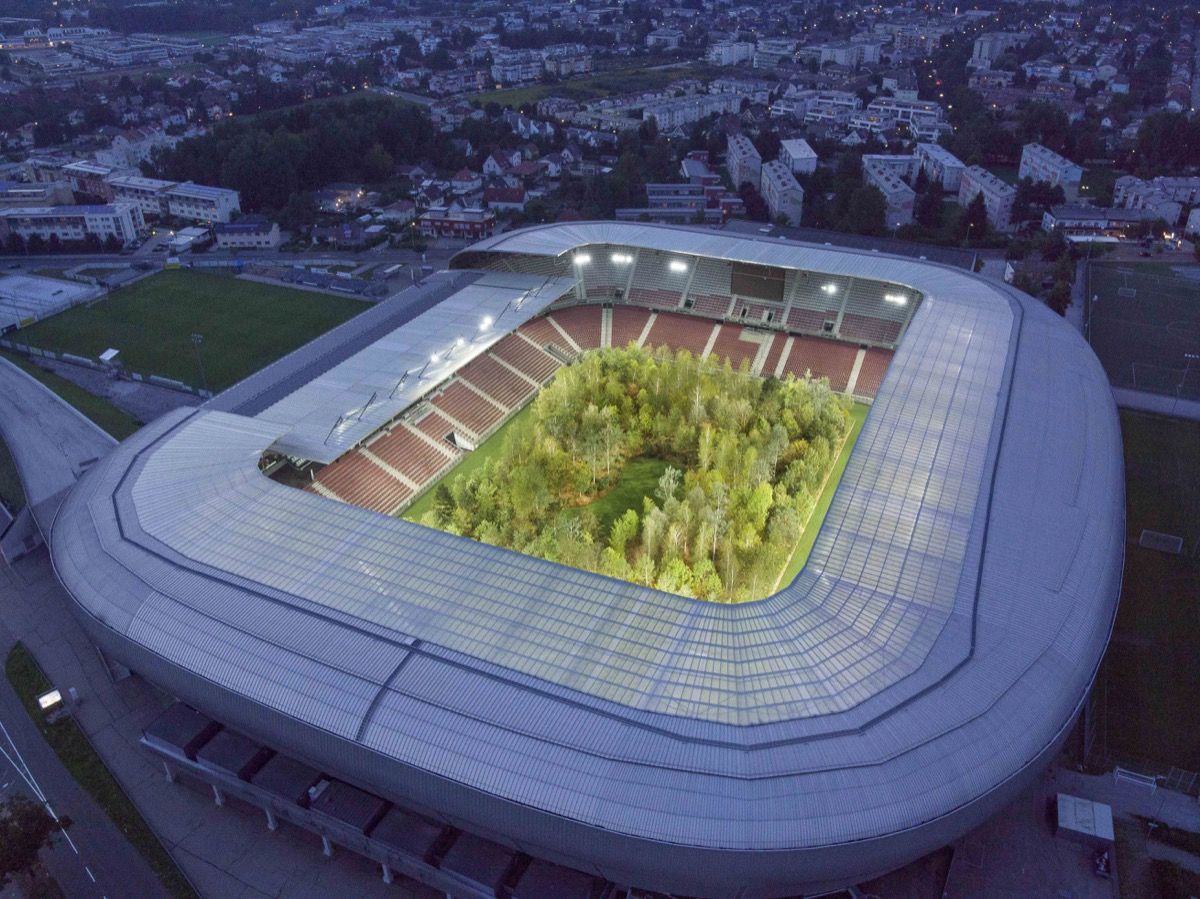 Klaus Littmann, For Forest – The Unending Attraction of Nature , 2019. Photo by Gerhard Maurer.From Times Square in New York to the Parisian gardens of Petit Palais, artists summoned international attention in 2019 through fresh public artworks. The most incisive sculptures, penetrating light installations, and eye-opening murals spurred meaningful discussions around identity, politics, climate change, and community, while, at times, inspiring awe as well. To honor such innovative, impactful artworks, the art-and-design fabrication company UAP recruits a panel of international curators each year to select the best new public works. Here, we share the 2019 list, with insights from the nominating curators on what makes these works so compelling. (To learn more, you can tune into an interactive webinar with UAP’s curators on Wednesday, December 4th at 7 p.m. EST.)

Sabine Hornig, Shadows, 2019. Photo by Mark Pokorny. © Sabine Hornig und VG-Bild Kunst, Germany. Courtesy Tanya Bonakdar Gallery, New York.“Sabine Hornig’s Shadows is a complex and ambitious site-specific work that transforms the International Towers Sydney’s public lobby and courtyard spaces into a remarkable journey through time and landscape. As a part of the Barangaroo development on the shores of Sydney Harbor, Hornig photographed native plants and topographical details to create a series of images that evoke the natural foreshores and vegetation of the pre-colonial period. Using both interior and exterior spaces, Hornig has layered, abstracted, and woven together images to immerse us in an evocation of nature in dialogue with contemporary architectural space.”—Nicholas Baume, Director and Chief Curator, Public Art Fund

Simone Leigh, Brick House, 2019. Photo by Timothy Schenck. Courtesy of the High Line.“Simone Leigh’s Brick House is the first commission for the High Line Plinth. The work features an imposing 16-foot-tall female figure, notably missing eyes and with hair styled in an afro and cornrow braids. This bust sits atop a solid, skirted form which in turn rests on a square pedestal. Elements of Brick House are inspired by Batammaliba architecture from Benin and Togo, teleuk dwellings from Cameroon and Chad, and the restaurant Mammy’s Cupboard in Natchez, Mississippi. Leigh’s bronze sculpture has absolute mastery over an unforgiving site; it is surrounded by the glass towers of Hudson Yards on one side and hovers above the relentless traffic of 10th Avenue. Brick House, though eyeless, watches over the city below her—a deity-like presence, a force to be reckoned with.”—Julia Friedman, Senior Curatorial Manager at Madison Square Park Conservancy

“Rumors of War is a bronze sculpture created by Kehinde Wiley for Times Square in New York and a future, permanent site at the Virginia Museum of Fine Arts in Richmond. The work explores the public art tradition of monuments to male military prowess. A young black man, hair styled in dreadlocks and wearing contemporary garb including a hoodie, sits atop a horse that appears to be mid-motion, its front leg raised and tail flowing in the wind. The figure, turned to the side and pulling on the reins, is completely in control of his steed. Wiley’s sculpture brilliantly gives power and majesty to those rarely featured in the monument genre while also questioning the masculine, state-sanctioned violence celebrated in such memorials. In Richmond, the statue will sit on Arthur Ashe Boulevard, near displays of Confederate statues. As Wiley notes, Rumors of War exposes ‘the beautiful and terrible potentiality of art to sculpt the language of domination.’”—Julia Friedman, Senior Curatorial Manager at Madison Square Park Conservancy

Nell and Cave Urban,  Eveleigh Treehouse, 2019. Photo by Nelson Cortez, Mark Pokorny and Juan Pablo Pinto. Courtesy of the artist, Roslyn Oxley9 Gallery, Sydney and STATION, Melbourne.“Situated on Gadigal land, Nell’s Eveleigh Treehouse communes with nature, site, and history, with two treehouses on elongated legs that are conjoined by low walkways sitting gently across Eveleigh Green. Over 400 volunteer members of the local community forged individual metal gum leaves with personal inscriptions that Nell transformed into a hospitable cave with curved, arched entrances that resemble a cheeky face. Anthropomorphic and human, Nell invites us into her playground where imagination and ideals, materials and artistry are melded in perfect harmony, adroitly described by her as a ‘secular gum leaf temple.’”—Natalie King, Curator and Editor

“Jenny Holzer‘s Vigil is a nocturnal text projection scrolling across the landmark Rockefeller Center in New York, elucidating the horror and devastation of gun violence. I have always loved Holzer’s acerbic and potent aphorisms that take the tempo of our times. The world is a mesmerizing mess, and she confronts the human toll of mass shootings with slogans, poems by teens, testimonies, and alerts such as ‘We were caught in the crossfire. I was shot with an AK-47.’ Over the course of two nights, Holzer’s messaging was prescient with its nightly vigil in New York as part memorial, part campaign, and part plea to stop the carnage.”—Natalie King, Curator and Editor

Xu Zhen®, Evolution-Multi-functional trainer, 2019. Courtesy of Xu Zhen® and James Cohan Gallery, New York.“XU ZHEN® is renowned globally for his apt manipulation of media to create works that provoke social critique through conceptual and pop-like strategies. His latest work, Evolution-Multi-functional trainer, was recently installed in a park in Chongming in Shanghai’s northernmost province, a low-lying alluvial island at the mouth of the Yangtze River. A juggernaut of steel, resin, and paint, the work is an unruly exercise machine that cannot be controlled by the average person, a satire on the exercise equipment installed across nearly every park in China by the government as a biopolitical administrative gesture to improve public health and also the productivity of society. Ironically, the equipment is primarily used by retired elderly, who are seen as ‘unproductive.’ Evolution-Multi-functional trainer comments on the infinite pursuit of power and the human (dis)illusion of becoming a superhero. The futility of this human quest is made further impotent by the installation site at an abandoned (now partially repurposed) facility, juxtaposing our lifespan with the ultimate redundancy of all that we build and create in the greater picture of time and the universe.”—Venus Lau, Artistic Director at K11 Art Foundation

“Realizing a thought experiment in spectacular fashion, Klaus Littmann installed a Central European forest in Wörthersee Stadium, Klagenfurt, Austria. FOR FOREST—The Unending Attraction of Nature was comprised of 300 trees erupting from the playing field that constantly changed with the weather and turning of the season. The work drew inspiration from a 1970–71 pencil drawing by Austrian artist Max Peintner, which imagined a time when forests exist only as exhibition objects. Littmann’s installation was equally enthralling and haunting, a timely reminder of the precarious future facing the natural world during the current climate crisis and a rapid increase in deforestation. Viewing the work from the grandstands, it asks if we are content to simply be spectators as our forests are logged and burned or whether more drastic action must be taken to preserve them.”—Nick Mitzevich, Director at the National Gallery of Australia

Yhonnie Scarce and Edition Office, In Absence , 2019. Photo by Ben Hosking. Courtesy of Edition Office.“An astonishingly beautiful dialogue between artist and architect, In Absence is the National Gallery of Victoria’s fifth annual Architecture Commission created by Kokatha and Nukunu artist Yhonnie Scarce and award-winning Melbourne-based architecture studio Edition Office. Standing at nine meters in height, the timber clad cylinder is at once art and architecture; built and ephemeral. Steel, Tasmanian hardwood, and hand-blown glass come together with a blackened palette ranging from textured, charcoal-stained timber to glossy black glass that exudes a visual darkness and focuses the eye to where light enters the structure from above. Subtle scents of ash are present, adding to the somber and entirely captivating experience of the space.“The temporary work (installed until April 2020) speaks to the Aboriginal history and practices around aquaculture and agriculture, food harvesting and architecture, acknowledging the vast knowledge and skill of First Nations people, which existed long before colonization.”—Natasha Smith and Ineke Dane, UAP Curatorial Team

“Lasting only half an hour and under the watchful eyes of Mexican soldiers and U.S. Border Patrol agents, children played on hot pink see-saws straddling the border wall between the two nations. This brief expression of joy was created by architecture studio Rael San Fratello, a collaboration between Virginia San Fratello and Ronald Rael. Realizing a sketch made in 2009, Teeter-Totter is one of a series of conceptual works that explore the wall as the fulcrum of economic and political U.S.–Mexico relations. In recent years, the human cost of this physical barrier has become urgently apparent with parents separated from their children and many detained in reprehensible conditions for seeking asylum. By creating a moment of play and joyful connection, the artists articulate the ways in which the actions of these nations can deeply affect the people living on both sides.”—Nick Mitzevich, Director at the National Gallery of Australia

“Co-curated by Candice Hopkins and Tairone Bastien, the inaugural Toronto Biennial used the city’s geographical location on Lake Ontario as a launching point for the overarching rationale ‘The Shoreline Dilemma,’ noting the significant alterations to the site over the past 12,000 years as a result of colonialism and industrialization. The Lake’s ever-shifting boundaries provided a pivotal metaphor from which to explore a central question: What does it mean to be in relation? Presenting Canadian, Indigenous, and international artists within and throughout freely accessible city-wide venues, works included Susan Schuppli’s Learning from Ice (2019–present); Sinaaqpagiaqtuut/The Long-Cut (2019) by Embassy of Imagination; ReMatriate Collective’s banner YOURS FOR INDIGENOUS SOVEREIGNTY (2018); and Lou Sheppard’s audio work Dawn Chorus/Evensong (2019), a sonic harmonization of the urban soundscape with local bird songs.“Cumulatively the Biennial was exemplary of the preeminent voice of Canada’s First Nations creatives in re-carving dominant histories while making paths for future, self-determined narratives in the context of broader global emergencies.”—Natasha Smith and Ineke Dane, UAP Curatorial Team