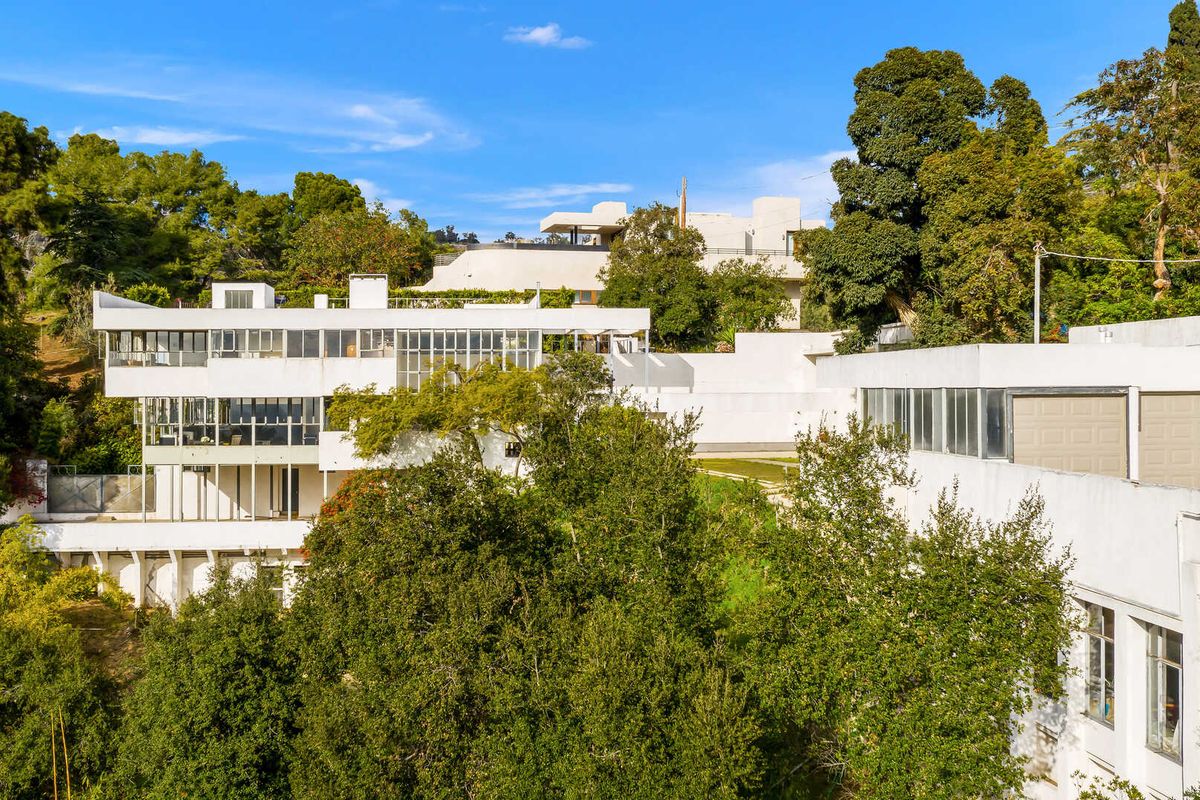 Once described as “a Mondrian painting come to life”

The house that put Richard Neutra—and Los Angeles—on the architectural map is for sale for the first time since 1961.

The austere residence is best known in popular culture for its cameo as the home of villain Pierce Patchett in L.A. Confidential. But the Lovell Health House is one of the greatest homes in LA, a boxy steel and glass monument that employed novel engineering and construction techniques and shocked Los Angeles with its industrial look.

The architect and author Charles Moore once described it as a “Mondrian painting come to life.”

“This home is a piece of artwork,” says Marci Kays, a real estate agent with The Agency, who is representing the sellers. The home, which sits on nearly half an acre on Dundee Drive, is available off-market. The price has not been determined.

Rumors of a sale have circulated for years and ratcheted up over the past couple of months as the owners opened up the residence to tours and small-scale events. The 4,807-square-foot home is in mostly original condition, though it has weathered over the years and would benefit from a sensitive rehabilitation.

Built for health and fitness guru Philip Lovell and his wife Leah, the home was positioned to take advantage of sunlight and views. Steel-framed windows run almost the entire length of the expansive living room, revealing views of the green hillsides and a glittering cityscape at night.

The home’s centerpiece is a cavernous sunken living room accessed by a staircase embedded with headlights and rims from a Ford Model A.

For nearly six decades, it was the family home of Morton and Betty Topper and their five children. Kays says the Topper family wants to find a buyer who will appreciate the home’s architecture—and either preserve it or restore it. She and her partner at The Agency, Jonathan Mogharrabi, say the views will be a big selling point.

“This is a view lot. The view is like the epitome of what Los Angeles is, the lush landscape, the palm trees,” says Mogharrabi. “It’s Jurassic Park-esque.”

Wedged into a steeply pitched hillside in Los Feliz, the home was built from 1927 to 1929. It has remained relatively untouched for almost a century as a shrine of sleek, pared-down design oriented around nature.

The light steel cage frame—an “open-web steel skeleton with walls of thin concrete shot from hoses”—was prefabricated, and, according to the Los Angeles Times, assembled on-site in just 40 hours.

At the time, Los Angeles was obsessed with ornamented Spanish and Mediterranean styles, and when the Lovell Health House opened, it attracted thousands of sightseers, according to articles in the LA Times archives.

Many were struck with its walls of steel-framed windows, “a greater profusion of them than in any home I have ever seen,” one newspaper writer declared. The sheer amount of sunshine that flooded into the home was dubbed “exceedingly modern.”

The house also grabbed national and international attention. In 1932, the Museum of Modern Art included the design in its “Modern Architecture” exhibit. The design not only launched Neutra’s career but his reputation as a formidable architect who embraced technology and nature—and cemented Los Angeles as a playground for the modern movement.