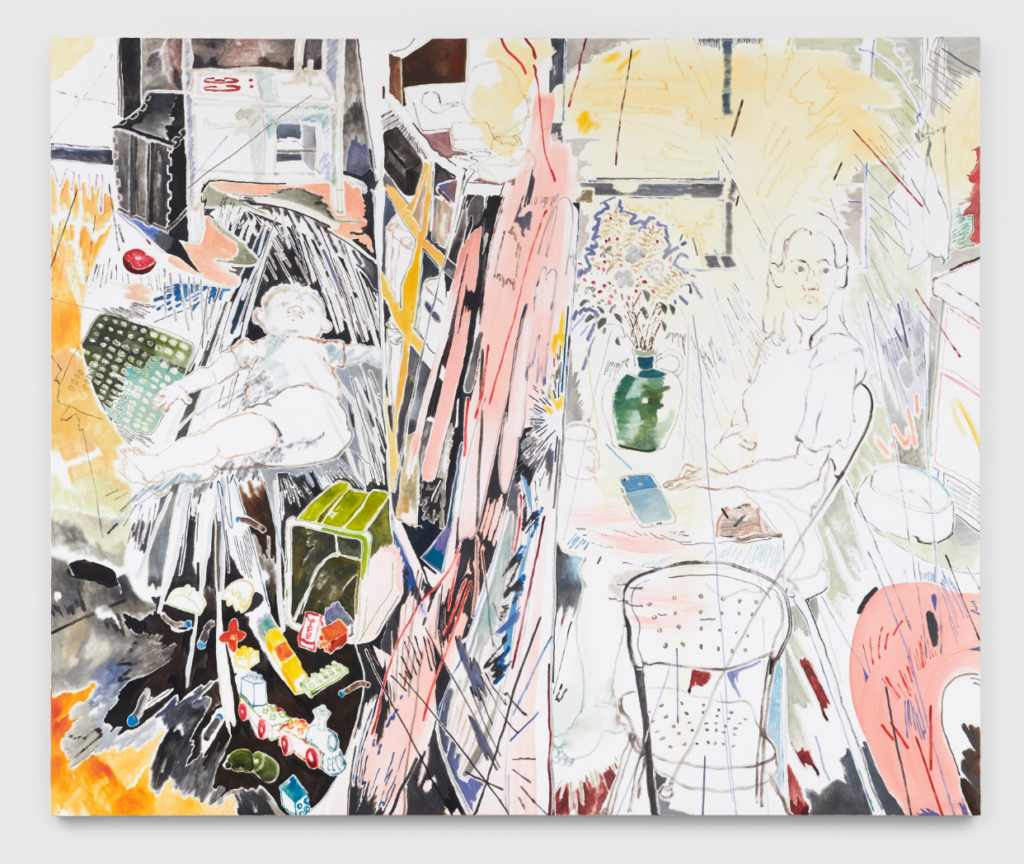 Hong Kong-based artist Chris Huen Sin Kan was supposed to have his first solo show at Simon Lee in London this month—a plan that naturally became impossible with lockdowns going into effect around the world. Instead, his exhibition “Puzzled Daydreams” is being presented in the gallery’s newly launched online viewing room.

“We felt it was important to create a platform to present Chris’s exhibition, particularly given he had worked so hard to deliver this incredible group of works,” the gallery wrote.

Huen’s large-scale painting and drawings feel oddly prescient in the current moment we’re living through. His works revel in the domestic sphere of his studio and home in Yuen Long, north of the dense urban center of Kowloon in Hong Kong.

The artist’s wife, Haze, his two children, and three dogs appear again and again throughout the works, pictured amid clutters of baby bottles, plants, legos, and the like. These images are anything but mundane, however, and instead reverberate wildly across their canvases, with objects and people hovering on different, juxtaposed planes and at various perspectives within a single work.

Huen’s technique emphasizes this sense of immediacy—he doesn’t make underdrawings and sketches but instead works from intuition, culling up past moments from feeling and memory. He paints by layering one dab of paint over another to create a pattern that results in a sense of living motion.

“Chris recently discovered the term ‘specious present,’ a concept developed in the 19th century by E. Robert Kelly that proposes our understanding of the present is rooted in a collection of ever-passing moments. This idea resonated with the artist given the ways he explores our understanding of time and space as a combination of varying perspectives in his work,” the gallery explained.

The effect is something feverish, almost religious, despite the dailiness of his subject matter, and at times his family members appear almost like angels or divinities alighting the mortal world. All in all, the exhibition is a joyful reminder that it is in perspective—rather than surroundings—that beauty can be discovered.

Watch a tour of “Puzzled Daydreams” at Simon Lee below.