Instead of Tearing It Down, They Rescued It 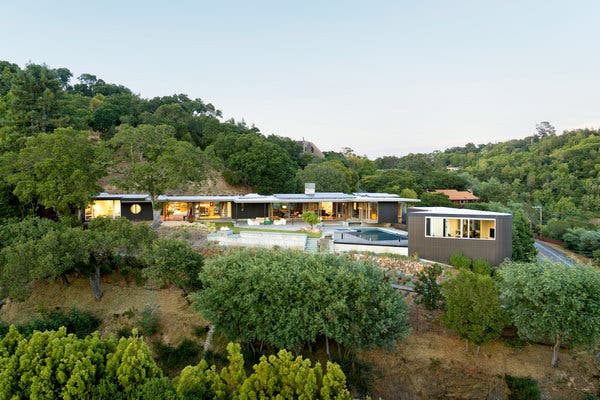 A couple of experienced renovators were looking for a house in the Bay Area to demolish — until one with a strong ‘midcentury vibe’ won their hearts.

When Mike and Kari Zazzara began looking for a home where their family could spread out in Marin County, Calif., they thought what they wanted was a teardown.

Experienced renovators, they had already demolished and rebuilt one home in San Francisco and were looking forward to doing the same thing in a new place, so they could create exactly what they wanted.

That was before they stumbled on a listing for a house they hadn’t expected: a low-slung modern home in Kentfield, designed in 1946 by the architect Henry Hill, of Mendelsohn, Dinwiddie and Hill.

“We saw this house, and it really resonated with us,” said Mr. Zazzara, 49, a banker who works in construction financing.

“I just fell in love with the lines, the views and the location,” said Ms. Zazzara, 47, adding that the home had been featured in House & Garden magazine in 1948. “It was a diamond in the rough.”

Although it had dated finishes, and the single-pane windows, antiquated building systems and minimal insulation were all of concern, “the bones of the house were great,” Mr. Zazzara said. “The midcentury vibe was strong.”

So they shifted their focus to planning a restoration and, after finding out there were multiple offers on the property, bid far above the listing price of about $2.5 million, to secure it for $2.9 million, in July 2013.

They moved in immediately, sold their home in San Francisco and enrolled their twins, Austin and Olivia, now 9, at a local school. Then they called Fischer Architecture, in Berkeley, to begin planning the updates and changes.

“You could immediately see the beauty of the place, and that it was a prime example of postwar Bay Area style,” said Andrew Fischer, who runs the firm with his wife, Kerstin Fischer. “These architects were excited about this freedom and new sense of architecture, and what it could bring to how we live.”

Their dreams, however, “kind of outpaced the technology,” he added, noting that the house was nearly impossible to keep warm in the winter and that its cantilevered sections were sagging. Some parts of the floor plans also didn’t reflect the way most people want to live today.

The master suite, for example, was split in two and connected by a Jack-and-Jill bathroom, so “the man would sleep in one room, and the woman would sleep in the other,” Mr. Zazzara said.
Also, the kitchen was closed off from the rest of the house, and the entry hall was awkward and cramped.

“There are often programmatic problems when we go in to work on these older houses,” Ms. Fischer said. “There is a formality and separation of spaces that doesn’t really apply anymore.”

The big question, she said, was “how to maintain the resource of this prime specimen of a house, but insert the functionality and comforts of 21st-century living.”

By the spring of 2015, they had a plan. They would replace an existing cabana in the yard with a pool house that had its own kitchen, bathroom, bedroom and living space; upgrade the materials, finishes and systems of the main house, while reconfiguring parts of the floor plan; and build an addition to accommodate a new master suite.

To dramatically overhaul the one-acre lot, the Zazzaras engaged David John Bigham, a landscape architect, asking him to use leftover pieces of the overgrown landscape to create walking trails, gardens and a vegetable patch. When they discovered that the original kidney-shaped pool was failing, they realized it would have to be replaced, as well.

The family was intent on living in the house during construction, so their contractor, Olson Bros., completed the work in three phases.

First, the construction crew built the pool house, which took about nine months and is intended to serve a wide variety of functions. At various times, the structure has been used as a changing room, a guest suite, a home office and a playroom.

“We call it the Lego Lounge, at the moment,” Mr. Zazzara said.

It served as the family’s temporary accommodations, however, while workers renovated the main house, where they opened up the kitchen to the dining room with large sliding doors and expanded the entrance hall. They straightened out sagging cantilevers, replaced the glass with insulated windows and ripped up floors to replace the inefficient radiant heating system.

To preserve the original rough-sawn western red cedar wall paneling and ceilings, they tore off the roof and installed new wiring, sprinklers and insulation from above, before finishing with a new roof and solar panels for electricity and hot water.

Where the house was once a leaky energy hog, Mr. Zazzara said, now “we’re actually putting electricity back into the grid.”

Finally, after completing the restoration work on the existing structure, they added the wing that would hold the master suite.

By the time they were finished, it was the summer of 2018 and they had spent about $3.6 million — roughly triple what they had anticipated at the outset.

As with any renovation project, there were many surprises along the way.

“But part of it was a function of the fact that we made a conscious decision not to cut any corners,” Mr. Zazzara said. “We realized this is a place we could be in forever.”