How to Sell a House in Southern California: Make a Movie 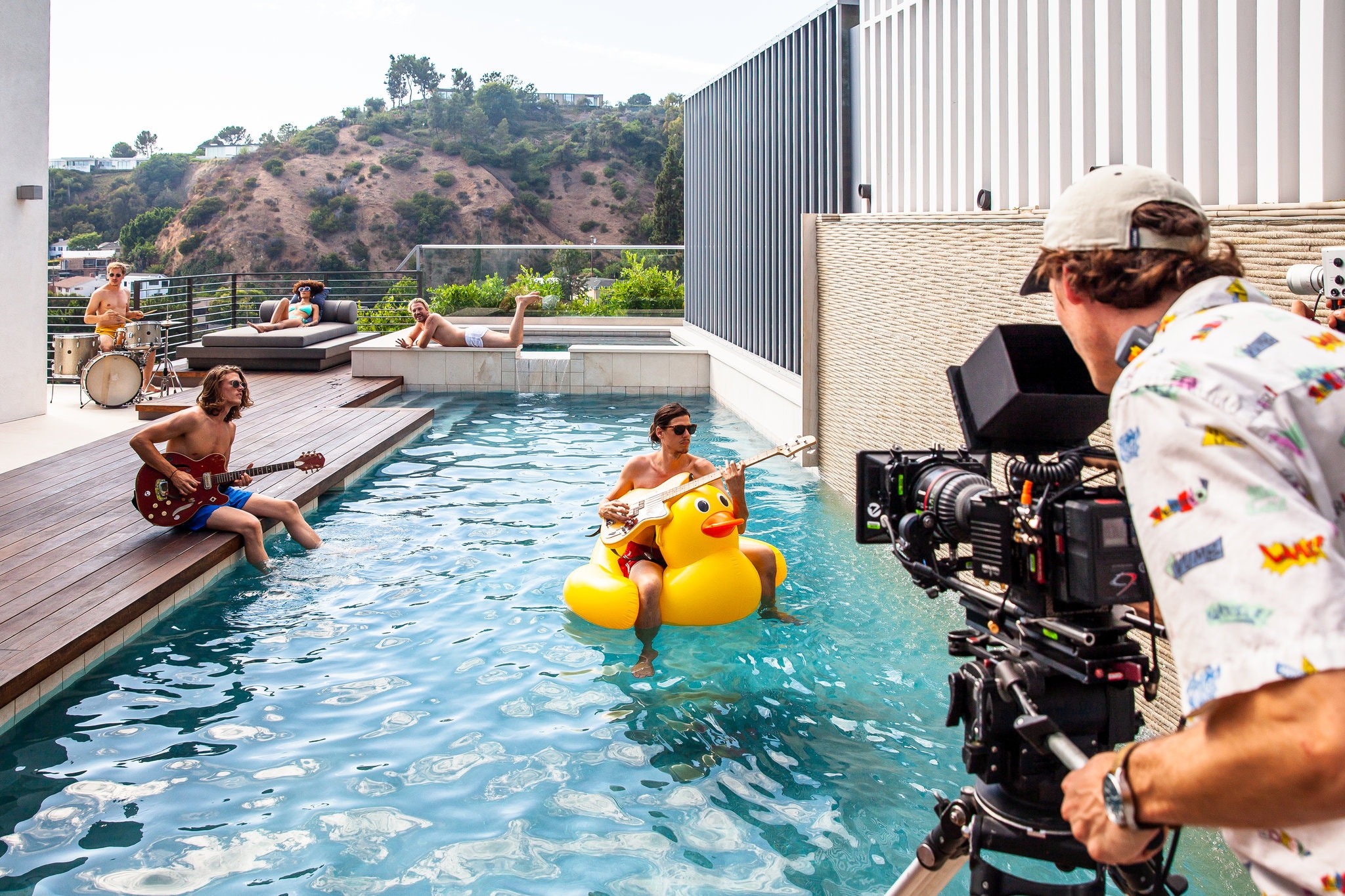 Raj Qsar is eyeing the sky nervously. It’s early afternoon in Corona Del Mar, Calif., and his six-man camera crew is on the clock only until sunset. But clouds are rolling in fast over this wealthy Southern California neighborhood, and the next scene on today’s docket — a glamorous drive down the Pacific Coast Highway followed by a beachfront double date — is now feeling tricky.

On other film sets, the producer and director might huddle and order a break, or call it a wrap until tomorrow. But Mr. Qsar isn’t a director — he’s a real estate agent. And the star of his film is not a good-looking young actor (although there are four of those on set), but rather, a $1.7 million Orange County home. This short and sudsy film, he hopes, in which two young couples drink wine, play board games and wander through sleek, neat rooms, will do the trick to attract a buyer.

“Telling stories and creating connections with people takes more than just photos,” said Mr. Qsar, who heads a luxury brokerage called the Boutique Real Estate Group. “For us now, it’s all about the power of video.”

Mr. Qsar began dabbling in cinematic videos in 2008, just two years after leaving his job as a pharmaceutical sales representative to jump into the Orange County housing boom. He came across a wedding videographer who was producing emotionally charged, story-driven films for brides and grooms, and, he says, a light bulb went on.

“I had an idea about telling the story the same way, but as the story of a house,” he said. “One of the things I always tell my clients when they walk through is, ‘Can you see yourself having Christmas dinner here or birthdays and bar mitzvahs here?’ I wanted to really pull out the emotional aspect.”

After putting the wedding videographer on his payroll and investing $20,000 of his own money in video equipment, he made a handful of short film promotions for homes in the $1 million to $2 million range in Orange County, including a four-bedroom Mediterranean-style estate in Villa Park.

In that video, images of a young blond wife sitting at a piano and singing Frank Sinatra’s “Summer Wind” are spliced with images of a Porsche-driving husband arriving home from work. As he showers upstairs, the wife ushers in a flock of eager friends and children with balloons and sets up a surprise party by the pool. The song reaches its crescendo, the husband descends the stairs, and there’s his family, there’s a cake, and there’s a sweet, picture-perfect backyard celebration.

When that home sold, for $1.7 million, it set a record as the most expensive home sale ever in Villa Park.

“Once real estate agents started doing high-end video productions, putting in models and actors was a no-brainer,” said Jimm Fox, president of OMM Video Marketing, a Canadian agency that tracks trends in cinematic storytelling. “You’re not just selling an address, you’re selling a lifestyle. And to do that, you need humans.”

Production budgets for these films can range from $3,500 to $70,000. Often the real estate agent is picking up the tab, but in some cases, agents discuss their plans with sellers and agree to split the bill or have the costs added to their fees.

Mr. Fox said the trend for Hollywood-style videos kicked off around 2007 and was a natural progression from the lush but empty footage of staged homes that preceded it.

“Real estate at the high end is always an aspirational sell,” he said. “You want to showcase a lifestyle. So you start shooting homes, and then you add models to make it more vibrant, and very soon you want to turn it into a story.”

The Australian production studio PlatinumHD claims to have been the first to produce these Hollywood-style real estate films. In 2011, the studio helped the trend spread internationally by producing a video for the Queensland-based property management firm Neo Property.

In it, a young woman clad only in a lacy bra and panties and bound to a chair inside a hyper-modern luxury home, makes an emergency call for help and is asked to describe where she is. As she describes the home’s chef’s kitchen and waterfront views, its in-house movie theater and its private elevator, a SWAT team descends to rescue her, led by none other than Neo Property’s real estate agents themselves.

The film, of course, is as much about the appeal of the model as the home. But by using sex, helicopters and shots of a gleaming red Corvette to sell the property, Neo made it quite clear: In this sort of marketing, peddling a fantasy can help close a deal.

Ben Bacal began adding actors to his listing videos in 2014. The Los Angeles-based agent, a former film student who also dabbles in internet companies and has more than $2 billion in sales to his name, is a fixture on the high-priced home circuit in Hollywood. He offers his clients a professionally produced video for every home he agrees to represent, and he estimates that in 40 percent of those cases, he includes actors and a story line.

Some are sweet: A home in Bel Air, which he listed in March 2016 for $48.5 million, shows a brother and sister channeling their best Ferris Bueller impressions, faking sickness in their custom bedrooms before dashing out to their backyard infinity pool with skyline views after their parents head off to work. (The home sold for $39 million in December 2016.)

Others are more slapstick, like the film for a home on Rising Glen Road in Los Angeles (the house where the actress Brittany Murphy died), in which an adorable corgi named Sherlock Bones inherits the mansion listed for $18.5 million and heads there to live his best canine life. (That home sold in 2017 for $14.5 million.)

In all of Mr. Bacal’s videos, plots are thin but visuals, and humor, are laid on thick. That’s intentional, he says.

“Instead of telling a long dramatic story, I like to pull characters through the house and do something that makes it voyeuristic, where you can see the property. Focusing too much on story takes away from the home,” he said in a phone call from Mykonos, Greece, where he was on vacation. “I’m not Quentin Tarantino.”

His greatest triumph to date is a home on Hillcrest Road in Beverly Hills. Markus Persson, the Swedish video game programmer behind Minecraft, saw the short film that Mr. Bacal produced for the eight-bedroom, 15-bath home, showing two young women arriving in a Rolls-Royce and enjoying the home’s features, which include a candy room and a 24-seat theater. Beyoncé and Jay-Z were also reportedly interested in the property, which was priced at $85 million. Just seven days after seeing the film, Mr. Persson purchased it for $70 million.

Mr. Bacal credits his success to his ability to not just create compelling footage, but also to distribute it effectively.

He pours cash into boosting the films on YouTube, advertising them across Facebook, Twitter and LinkedIn and promoting them in the right markets. In Mr. Persson’s case, Mr. Bacal had made the decision to promote the mansion not just in the United States but also in Sweden, a decision that paid off.

“It’s not just about creating a 90-second video. It’s also about knowing how to use video to effectively market that property. And that’s going to mean breaking it up into smaller components and using social media platforms to promote it,” said Mr. Fox, the Canadian marketing executive.

“In a market where there’s escalating supply but still anchored to another time, the sellers are trying to market much more creatively,” Mr. Miller said. In his mind, the sleeker and more expert-looking the video, the more likely it is that the seller is trying to justify a high price tag.

“When I see these videos, or something like a camel at an open house, that’s a clear sign of something that’s overpriced,” he said.

Mr. Qsar, the Orange County real estate agent, produces a video for every home that he represents, spending from $2,500 to the low six figures to produce them. He pays out of his own pocket. While he has had eight-figure listings, most of his sales are in the $1 million to $2 million range.

“Fifteen years ago, I never thought I’d be shooting films,” said Mr. Qsar. “I had a day job and just wanted to sell a couple houses and see what happened. But then I sold 10 and then 15 and 20, and then social media hit, and I thought, ‘O.K., how can I be different?’”

In the hypercompetitive world of Southern California real estate, he said, it’s worth it because his videos give him a definitive edge.

“Our listings are recognizable before they even hit the market, because people see them on social media,” he said. “So now, every time I get together with my team on a house, the first question we ask is, ‘What is the story going to be on this house?’”