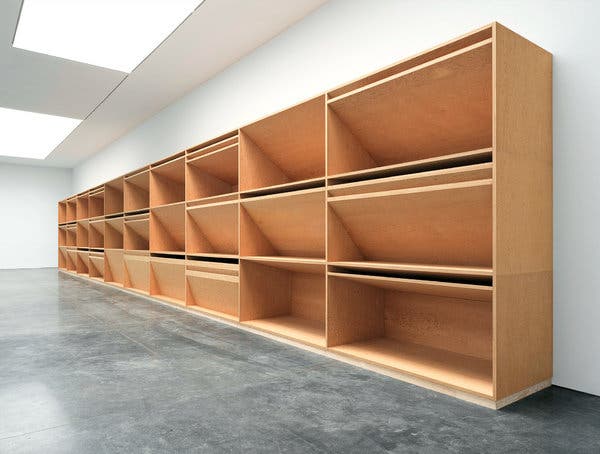 Yes, it’s better to see this great flutter of planes, volumes and edges in person. But an online visit is the next best thing.

Donald Judd’s large, untitled installation piece in unfinished plywood at Gagosian Gallery is a plain-spoken giant that, surprisingly, has quite a bit to say. In its complexity and openness, it seems like almost nothing else Judd (1928-1994) ever made, and it hasn’t been seen in New York since 1981, when it debuted at the Castelli Gallery in SoHo a year after its completion.

I remember being stupefied by it then. Reviewing it for the Village Voice, I called it a masterpiece almost in self-defense. Seeing it again, before the coronavirus pandemic shut the gallery, I can say it’s definitely a masterpiece, and also a pivot. It sums up both the wall and floor pieces from the first two decades of Judd’s three-dimensional work, while turning toward his more expansive later works. A prime example of these is the large multicolored piece that dominates the final gallery of “Judd,” the superbly selected and installed retrospective at the Museum of Modern Art — a show that I think would have pleased Judd, who was no friend of museums.

The work at Gagosian is a big grid of 30 rectilinear volumes, each measuring 4 by 8 by 4 feet and arranged in three horizontal rows of 10; or, conversely, 10 vertical stacks of three. The whole thing is made of standard sheets of Douglas fir plywood 1 3/8 inches thick. Each unit is partitioned to some degree by an additional plane or by two parallel ones; all slant diagonally down and inward, but at different angles. Some connect to the back of the unit, others to the bottom, alternately suggesting slanted ceilings or eccentric garage doors. Stretching in total 80 feet across and 12 feet up the longest wall at Gagosian, the result is arguably the most communicative, extravagantly available work of Judd’s career: a great flutter of planes, volumes and edges — the cardinal components of Judd’s language — and shifts in light and shadow. The six images on the Gagosian site provide plenty to look at.

Flavin Judd, the artist’s son, has compared it to a Bach fugue. One fuguelike aspect is the variations in the cutting of the laminated edges of the plywood partitions. As the diagonal sheets slant closer to the front of the piece, their upper edges are cut at ever sharper angles until they and their laminations spread out, nearly tripling in width — offering a second measure of the planes’ steepness.

The piece is a big, magnanimous puzzle and an exercise in vision-sharpening comparative looking. Where Judd usually prided himself on pieces that the viewer comprehended by circumnavigating, here we are limited to a single side but granted a surfeit of information to sort through. You may seize on clusters of repeating elements, both horizontal and vertical, as signs of an overriding system. But as you proceed, comparing volumes, edges and angles, rehearsing Judd’s decisions and their effects, you gradually realize that almost none of the volumes repeat exactly. The system is open-ended.

Judd’s midway masterpiece has the beauty and clarity of full disclosure. From the first instant it puts everything up front. As is not always the case with his work, the process of self-enlightenment it stimulates may make you feel smarter than you thought you were. And of course, you are.

Through April 11 at Gagosian; gagosian.com.