Art Industry News: Damien Hirst Has Created a Rainbow of Butterfly Wings to Raise Money for the National Health Service + Other Stories 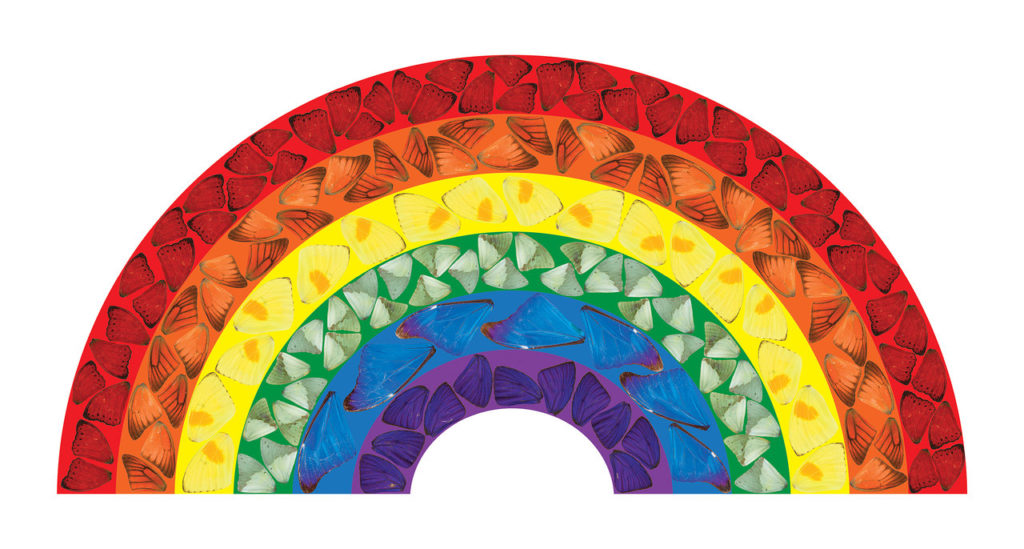 Plus, François Pinault’s Paris museum won’t open until 2021 and Christie’s teams up with the Andy Warhol Foundation for a charity sale.

Art Industry News is a daily digest of the most consequential developments coming out of the art world and art market. Here’s what you need to know on this Monday, April 20.

Auction Houses Face a Reckoning – The New York Times surveys auction houses’ efforts to remain competitive even as their salesrooms are closed and their way of doing business faces unprecedented challenges. Auction houses around the world need to find a way to deal with their hefty overhead, which includes prime (and currently unused) real estate. But the bigger question is whether virtual sales can come close to generating the kind of money in-person events do. In 2019, online sales made up just 9 percent—about $5.9 billion—of the $64 billion in total art market sales. “The auction itself is high drama—gladiator sport,” said the dealer Brett Gorvy. (New York Times)

Pussy Riot Member Pushes to Support Persecuted Creatives – The nonprofit organization Artists at Risk is seeking to support those who face threats to their freedom or who are unable to reach safety during the current pandemic. Iraqi painter Dia al-Azzawi and Pussy Riot’s Maria Alyokhina are backing the campaign, which is trying to raise funds to cover living expenses for artists at risk and, where necessary, help relocate them to a place of safety in their country or region. (Press release)

Damien Hirst Designs a Rainbow for the NHS – The artist took time away from answering dozens of fan questions on Instagram to create a new rainbow design to help raise money for the National Health Service. The image, called Butterfly Rainbow and made up of bands of butterfly wings, can be downloaded from Damien Hirst’s website and displayed in people’s windows to show their appreciation for NHS staff. A limited edition print of the design will also be available for purchase. “The rainbow is a sign of hope and I think it is brilliant that parents and children are creating their own version and putting them up in the windows of their homes,” Hirst said in a statement. (We’ll ignore the fact that in much of his work, the butterfly motif is meant to be a symbol of death rather than uplift.) (Press release)

Former LACMA Curator Protests Zumthor Project – Detractors of LACMA’s new $750 million Peter Zumthor-designed revamp are not giving up, even though demolition on the old buildings has already begun. LACMA’s former chief curator for European art, J. Patrice Marandel, has even agreed to be on the jury for a renegade open call for architects to submit alternative ideas, organized by the protest group Citizens Brigade to Save LACMA. (Los Angeles Times)

Christie’s Teams Up With the Warhol Foundation for a Benefit Sale – Christie’s will hold a charity auction in partnership with the Warhol Foundation to raise money for struggling American artists. “Andy Warhol: Better Days” includes 60 photographs by the famous Pop artist and will run online from April 28 to May 6. The top lot is a shot of famed Met curator Henry Geldzahler posed behind the artist against a backdrop of yellow flowers (est. $15,000–20,000). (Art Market Monitor)

Meet the Top Young Collectors to Watch – The next generation of art collectors don’t all come from finance. In fact, according to a glossy survey by Cultured magazine, they represent a broad range of industries and professions, from acting (Laura Harrier, Los Angeles), to fashion design (Leslie Amon, Paris) to tech (Lizzie Grover and Tinder founder Sean Rad, Los Angeles). But don’t be fooled—as usual, there is a healthy dose of family money thrown in here, too. (Cultured)

The Chef Who Had 700 Unknown Paintings – When Ficre Ghebreyesus died at the age of 50 in 2012, he left behind more than 700 paintings and hundreds of works on paper that capture his memories of growing up in East Africa. While he moonlit as an artist, his main job was as the chef of the beloved Caffe Adulis in New Haven, Connecticut. Galerie Lelong in Chelsea is now representing Ghebreyesus, and his first New York exhibition “Gate to the Blue” will open on September 10. (NYT)

François Pinault’s Paris Museum Opening Delayed – The highly anticipated opening of François Pinault’s epic Paris Museum, the Bourse de Commerce, has been postponed until spring 2021 due to COVID-19 and France’s continued lockdown, which was recently extended into May. Pinault had already postponed the grand opening from mid-June until September, but now, the big reveal of the Tadao Ando-designed museum will have to wait even longer. (Le Figaro)

teamLab Gets a Solo Show in San Francisco – The digital art collective will get its first US solo museum exhibition at the Asian Art Museum in San Francisco. “teamLab: Continuity” will be held in the new Akiko Yamazaki and Jerry Yang Pavilion, the city’s largest new exhibition space, with dates to be confirmed at a later time pending the public health situation. (ArtfixDaily)

Holburne Museum Launches Fundraising Campaign – The Holburne Museum in the UK, built to house the collection of former Navy officer William Holburne, is trying to crowdfund £50,000 ($62,000) to secure its future. The 130-year-old art museum has been shuttered since March 18 and management says it is now at risk of permanent closure due to a lack of ticket sales and other income. (BBC)

Take a Political Poster-Making Workshop Online – A former member of the Guerrilla Girls known as Aphra Behn is offering 12 lucky participants the chance to take a four-hour poster-making workshop. The workshop, scheduled for May 8, will offer tips on how to make and distribute effective works of protest art (though it is not affiliated with the current Guerrilla Girls art collective). To register, visit the group’s website. (Press release)

A Frida Kahlo Blockbuster, Deferred – The Cleve Carney Museum of Art and the McAninch Arts Center at the College of DuPage are postponing their epic Frida Kahlo show until next year. “Frida Kahlo: Timeless” will now run at Cleve Carney from June 5 through September 6, 2021, and existing ticket holders will have their tickets automatically transferred to the news dates. (Press release)

UK Health Secretary Speaks in Front of a Very Distracting Hirst – The UK health secretary Matt Hancock seems to have borrowed Damien Hirst’s only portrait of the queen from the Government Art Collection. The pink and blue spin painting, which Hirst gifted to the government straight from his studio in 2015, was spotted behind him as he laid out the country’s new “battle plan” to fight coronavirus on ITV news. (The Art Newspaper)

.⁦@MattHancock⁩ seems to have borrowed Damien Hirst’s spin painting of the queen from the government’s art collection 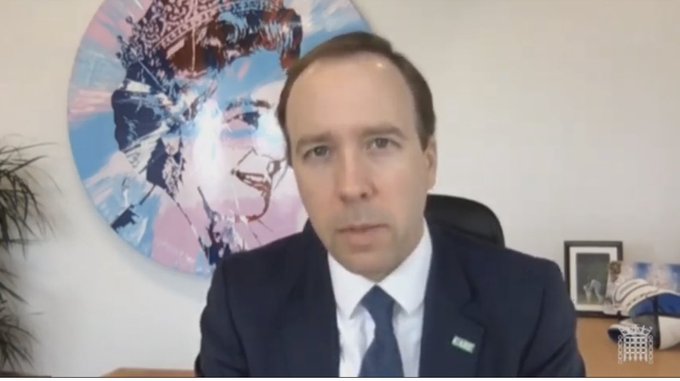 100 people are talking about this