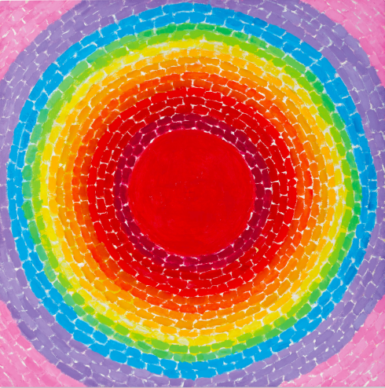 The painting is expected to sell for between $2.2 million and $2.8 million.

Yesterday, Christie’s announced that it would sell a brilliantly colored painting by the artist Alma Thomas at its New York postwar and contemporary evening sale next month. With an estimate of $2.2 million to $2.8 million—and a guarantee—A Fantastic Sunset (1970) is certain to smash the current record for a work by the artist, set just last May when Azaleas (1969) sold for $740,000 at Sotheby’s.

The online catalogue essay for A Fantastic Sunset notes that the work’s only previous owner (besides the St. Louis-based consignor) was a private collection in Philadelphia. While he is not named by the auction house, exhibition books and educational materials reveal the identity of this prior owner: disgraced former entertainer Bill Cosby.

Before he was sentenced to three to 10 years in a maximum security prison for drugging and sexually assaulting a woman in 2004, Cosby and his wife Camille resided in a home just outside of Philadelphia. (Christie’s declined to comment on the painting’s ownership history.)

Museum director Johnetta Cole, Bill Cosby, and his wife, Camille, at the November 2014 opening of “Conversations: African and American Works in Dialogue” at the National Museum of African Art in Washington, DC.

The work is included in the book The Other Side of Color: African American Art in the Collection of Camille O. and William H. Cosby, Jr., which detailed the massive 300-work trove of work by black artists that the Cosbys amassed over decades.

Much of that collection was pledged to the Smithsonian, and in 2015, the Museum of African Art in Washington, DC, staged “Conversations: African and African American Artworks in Dialogue,” a blockbuster show that featured 62 works from the collection and was funded by the Cosbys—though at the time the museum was accused of hiding the source of funding.

As the show opened, the Smithsonian faced backlash from critics who smelled pay-for-play, and chastised the museum for not addressing the fact that more than 50 women had at that time accused Cosby of sexual assault. (As Christopher Knight wrote in the Los Angeles Times: “Watching an art museum shoot itself in the foot is painful. Watching it then deny responsibility for the mess it has made is exasperating.”)

The work also appears in educational materials intended to teach young visitors to the exhibition about the works on display. One such lesson plan features A Fantastic Sunset as its lead image, and clarifies below that it is from the “Collection of Camille O. and William H. Cosby Jr.” (The connection was first spotted on Twitter by Greg Allen.)

While such materials show that Cosby owned the work up until the exhibition closed in 2016, the provenance listed by Christie’s suggests he has sold it since then. It’s not the only work the disgraced entertainer has offloaded amid mounting legal trouble: In November 2018, two months after he was sentenced for sexual assault, it was revealed that Cosby and his wife were selling art to pay for legal fees, including two works by Thomas Hart Benton that could be worth as much as $14 million.

Alma Thomas’s painting will be sold at Christie’s New York the night of November 13. The artist’s work has been gaining attention in recent years, although her secondary market has ample room to grow. The Obamas mounted a number of her works at the White House during their administration and, more recently, Thomas was the subject of an exhibition at Mnuchin Gallery in New York. The Chrysler Museum of Art in Virginia is currently preparing a Thomas retrospective due to open in 2021.