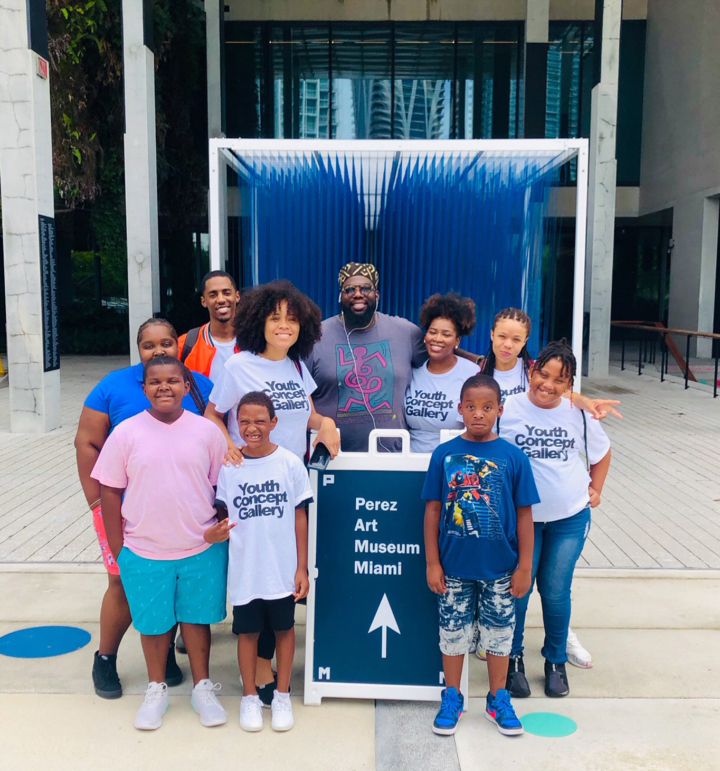 In founding Youth Concept Gallery, Mr. E transformed a dayroom and empty cell block into an art gallery and library with a corresponding art therapy curriculum.

MIAMI — At a facility in West Palm Beach, Florida, a community activist and recreational therapist — known in other circles as DopexGold, but here as Mr. E — has founded the Youth Concept Gallery, transforming a dayroom and empty cell block into a veritable art gallery-slash-library with a corresponding art therapy curriculum. “How can we change the narrative of how people see incarcerated youth?” he asks. “They all deal with their vices, but here we identify the creative parts of their personalities, what we can push to grow. The heartbeat is behind the walls. While your body is trapped, I’m going to let your mind run free.”

The Youth Concept Gallery intends to intercept Florida’s school-to-prison pipeline — Florida’s exclusionary, racially-biased disciplinary policies were once arguably the country’s worst — with a program based on talent development and intellectual growth. Being tried as a child (even if you are, indeed, a child) is a rarity in Palm Beach County, which is among the top 25% of Florida counties responsible for youth arrests. According to a 2017-18 ACLU document on Palm Beach’s school-to-prison pipeline, Black students, who only represent 28% of the county’s total student population, make up 65% of county children charged as adults. 61% of student arrests — and 73% of student arrests made solely on disorderly conduct — involved Black children.

The document underscores that Palm Beach police, in the face of understaffed schools, are charged with behavioral management, resulting in arrests for school fights or other class disruptions. One arrest tends to increase the likelihood of more; a decades-long trend of decline in school-related arrests was recently reversed, with the 2017-18 school year seeing a 7% increase in Palm Beach alone. In South Florida, “you’ve got a lack of resources, a lack of support in our communities from local politicians and commissioners,” Mr. E discloses. “The system likes to put band-aids on gunshot wounds. “This is something I was thinking about often — the systemic offsets I was dealing with, already, as a Black man.”

It’s worth noting that the Youth Concept Gallery’s goals extend beyond its own walls. Mr. E also oversees 436 Gallery, a historical home in Pleasant City — now more commonly known as Northwood — the oldest Black community in West Palm Beach. The home, gifted to Mr. E by West Palm Beach’s Community Redevelopment Agency (CRA) — prompted by the popularity of Art in the Park, a monthly event which teamed up with the Trayvon Martin Foundation for Miami Art Week — is currently at risk of being bulldozed by the same agency. The CRA would like to replace it with a commercial development, though Mr. E says, calmly, “I told them they’d have to kill me first.” He’d encouraged local artists and kids, many formerly interned at the detention center, to paint and tag the building; such community engagement subsequently raised the home’s value. Currently, it’s an archive — community elders have contributed ephemera, such as magazines and framed “Whites Only” signs from an earlier Florida, when Negro League Baseball players practiced nearby — where Mr. E continues to host art workshops, yoga classes, and documentary screenings. At the time of this writing, Mr. E, after requesting extensions, has been ordered to vacate the premises by March 31, in the midst of the COVID-19 pandemic.

Mr. E, who I’m interviewing for a second time, has worked at the detention facility, located just north of 436 Gallery, for four years. Fashion and interior design are his first loves; in 2016, he was, he tells me, “knee-deep in art, fashion, and events. I was doing a concept pop-up shop, merchandising for major recording artists and pro athletes, a lot of freelance work. So I brought that here.” He and the kids cleaned and painted the empty cell block; on his days off, Mr. E would source books and thrift store furniture, and his artist friends would emblazon the walls with murals. It took just a few months to institute the educational curriculum; it moves, he explains, “with the kids,” who stay at the facility for 9-12 months and spend time at the gallery as part of their required recreational and therapeutic sessions.

“The last group was more athletic; now, I have a more artistic group,” he explains. “If one youth is a great writer, I’ll ask, ‘Who else can write?’ Then I’ve got a group of strong writers.” Mr. E pays attention to how one teen might fold his clothes, how another communicates with friends. Everyone, he insists, has their own particular approach to the world, and each needs to be nurtured. “As an adult, I have to humble myself and become a guest in their world. That’s something I’d tell adults dealing with incarcerated or at-risk youth, or their own kids: humble yourself and listen. They’re the future. They’ll see things your eyes might not catch. They’ve got their own realm.”

Last time we spoke, in 2016, the gallery was unfinished, decorated with work by two local muralists and a lot of anime. Today, it’s expansive. The dayroom has soft couches and a projector and stacked bookshelves; work by artists like Fary D Charles (known as Junkyard) and Von Davis (known as the Female Picasso) cover the walls, leaving nothing cold, stark, or untouched. Hitting the warmth of paint, the overhead lights lose their harsh glare. The cells, meanwhile, are miniature galleries of their own, each with a comprehensive visual theme: photography, fine art, Black history. “That’s literally turning something negative into something positive,” Mr. E notes. There are books on Jean-Michel Basquiat and Angela Davis, and a speaker queued up to play J Dilla, Madlib, Miles Davis (“I make sure to put them onto jazz,” says Mr. E). For our conversation today, Mr. E has selected four youths to tell me about their experiences here, identifying them not simply by their names but by their budding skills and interests — a future radio program host, a writer, a rapper, a young entrepreneur who will soon act as gallery manager. “There’s a lot of negative energy around here,” one boy, who’s 15, tells me. “Being in this space changes my mood. We settle down, we write music, we paint — it changes our environment. By the time the day is over, I’m relaxed.” Another adds: “If I’m being honest, having an art gallery like this — it’s a place where you feel appreciated, especially coming from some environments where you’re not going to be appreciated for that type of stuff, like art.” A third boy tells me he was shy and timid before spending time in the gallery; now, he feels more confident.

The kids have added to the murals themselves, often with collages — contraband like magazines is typically banned from such facilities, but Mr. E renders them acceptable materials for art therapy. “Instead of getting in a fight, you can work with this magazine — but can you be creative with it?” he asks me, rhetorically, as if he were speaking to the kids. “This is your portfolio. This is your gallery.” If he can’t find a loophole for a hobby, Mr. E will at least help cultivate its growth: Tattoos aren’t allowed under any circumstance, but he’s started sourcing literature and films to teach the kids eager to ink each other’s skin about the art’s history — and its viability as a career. In the same spirit, he helped the youths establish an official barbershop. They were already cutting each other’s hair. Why not make it a simulacrum of a future business?

As a headquarters for community engagement, the Youth Concept Gallery is ultimately a platform, explains Mr. E, designed as much for the facility’s outside contributors as the kids interned within. Artists invited to make or hang work in the detention center’s gallery might also take part in Art in the Park or contribute an artwork to 436 Gallery; artists involved with all three projects become Youth Concept Gallery resident artists. “Another goal for the Youth Concept Gallery is to create a platform for emerging artists, because we might not have one to soar from,” says Mr. E, referring primarily, he explains, to both the exclusivity of the art world and the forms of gatekeeping that sequester Florida’s youths of color, especially Black youths, from programming to support their creative talents.

In turn, resident artists set the example for the kids on the inside; the goals of the detention center’s gallery continue long after the kids leave. “It’s hard to change, in 9 months, how a kid has been living for 16 years, but we try,” says Mr. E. “[Outside of the facility,] a lot is happening with gentrification, and guys like me are rare. Who will a kid go to when he has a problem? He can’t go into a gallery, because people there might look at him funny. That’s why it’s important to create these platforms.”

In addition to 436 Gallery, Art in the Park, and the Youth Concept Gallery, Mr. E is continually organizing various events, such as the Youth Concept Gallery Summer Camp Tour — a recent project sponsored by Cleopatra Bernard — in which kids from local neighborhoods were taken on a field trip to the Institute of Contemporary Art-Miami, the Pérez Art Museum Miami, Apple, and Microsoft Wynwood. Bernard became involved with the organization after the death of her son, rapper XXXTentacion. The gallery’s educational curriculum will be instituted in various Florida youth detention centers over the next several years. Youth Concept Gallery is a model and a label, Mr. E explains, though one curated for local communities. It’s a cyclical exchange of growth between artists and youths, neighborhoods and their children; in the detention center, the project attempts to briefly interdict the machine of the prison industrial system that’d rather see such youths never make it out. It’s useful that the programming starts on the inside and then stretches out its arms to live, hopefully, forever. “With knowledge and resources,” says Mr. E, “we can build. We can do that behind the walls.”