A Dream Deferred, for Now 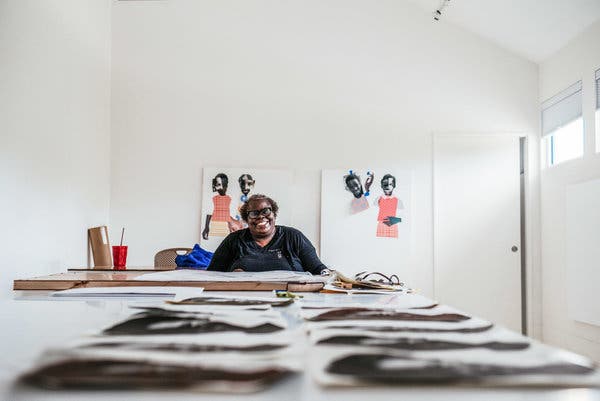 The coronavirus has pushed Deborah Roberts’s art exhibition at the Contemporary Austin at least to January. She is looking at the postponement as a gift.

Deborah Roberts could have given up long ago. With a mother who worked as a maid and a father who worked as an electrical lineman for the city of Austin, Tex., she grew up trading her drawings of cars, horses, dolls and airplanes for her classmates’ fat red pencils.

“It meant nothing to them, but it was everything to me,” she said. “I did not know what an artist was. I just knew that I wanted to do this.”

Her parents did not understand her passion. “My daddy hated art and said it was never going to be nothing,” Ms. Roberts said. “He would say, ‘What are you doing that for?’”

“I learned to get a thick skin when I was about 25,” she added. “Nothing anyone can tell you is ever going to make you stop doing it.”

That resolve is finally paying off. At age 57, Ms. Roberts is about to have her first solo museum exhibition — a big deal for any artist, but especially gratifying for one who, four years ago, was working in a shoe store to pay the bills.

“She’s worked for so long without any institutional recognition,” said Hallie Ringle, the curator of contemporary art at the Birmingham Museum of Art who helped organize “Fictions,” the 2017 show at the Studio Museum in Harlem that included Ms. Roberts. “What she hasn’t done, though, is let that stop her.”

Ms. Roberts, who has a big personality and a bigger smile, also hasn’t let the pandemic set her back, though it has pushed her debut at the Contemporary Austin in Texas to January from September — assuming the virus abates by then, as hoped.

Instead she is looking at this delay as something of a gift: to press the pause button on a career that had started to accelerate faster than felt comfortable, and to make entirely new paintings for her show, which will now be informed by this challenging cultural moment.

“It just gives me time to be greater,” Ms. Roberts said, “to really flesh out this work.”

In this way, Ms. Roberts exemplifies where many emerging artists find themselves during the coronavirus quarantine, which is where they always are — in their studios, making work that may never sell; deploying well-honed habits of toiling in isolation; and drawing strength from the creative process that has long sustained them.

While group shows are gratifying, Ms. Roberts had just begun getting coveted individual recognition. Institutions like the Whitney Museum of American Art and the Brooklyn Museum have acquired her work, which explores notions of beauty, identity and race through collage-based portraits of black children.

Celebrities who have purchased pieces include Beyoncé, Ava DuVernay and Barack Obama. Some even liken Ms. Roberts’s collages to those of the major American modernist Romare Bearden. “Roberts borrows from Bearden’s vocabulary but distills it into her own powerful language,” Elizabeth Fullerton wrote last year in Art in America, “capturing her subjects in a fragile state of becoming.”

And where she used to work in her cramped bedroom, Ms. Roberts now has a proper studio in Austin and just recently built herself a bigger house, where she moved in just before the virus outbreak.

But Ms. Roberts said she has always considered herself “a successful artist.”

“Maybe not monetarily, but I’ve always honored my work,” she said. “This is the reason I’m here.”

A high school art teacher urged her on and taught her drawing and painting. “All praise and glory go to her,” Ms. Roberts said. “Well, it goes to God, but she’s next.”

Ms. Roberts graduated with a bachelor’s degree in fine arts from the University of North Texas in 1985 and earned a master’s in fine art, from Syracuse University, in 2014.

Her early work reflected the sheltered world of her childhood, in which people went to church and the violence that can accompany racism was remote. “I used to draw and paint like Norman Rockwell, but it was black Americana,” Ms. Roberts said. “I grew up with women who would sit on the porch all day and dare you to get in their yard. Maybe it was sentimental or romantic, but it was real to me. When I started painting, I was painting that.”

Then she read essays by Cornel West, in which he talked about the power of the black body and how it was a taboo subject in white America. “It just shook me to the core,” she said.

“I did not know I was black until I was in the sixth grade,” she added, “till the second round of busing, when a white teacher hated me from the moment she saw me.”

Having started by using images of her own 8-year-old face, Ms. Roberts soon found inspiration in the faces of other children, like those from Africa and Haiti. She started with girls — exploring how society views them as well as how they view themselves — and recently began incorporating boys. “I’m looking for this type of innocence that has not been touched by pop culture but maybe has been touched by tragedy,” she said. “I know when I find that face.”

Ms. Roberts’s work has moved some distance from the Norman Rockwell days; her 2018 mixed-media painting, “Facing the Rising Sun” refers to 14-year-old George Stinney Jr., who in 1944 was wrongfully convicted of murdering two white girls in South Carolina. Dressed in a too-big prison uniform, Stinney was forced to sit on a book so he could fit in the electric chair. (The conviction was later vacated.)

“She uses different clothing, patterns and tropes like boxing gloves and checkered uniform skirts — these elements that might seem incongruous — and puts them together in collages that are deceptively simple,” said Heather Pesanti, chief curator at the Contemporary Austin, who is organizing the forthcoming show. “She creates these new whole individuals from fragmented parts as a way to tell her own story.”

No matter how hard it has been at times to make a living, Ms. Roberts has kept on making art. “She’s a fighter,” said Jeanne Klein, a prominent Texas art collector who has become a close friend. “I never had to fight like that.”

When she found herself forced to work in a shoe store four years ago, Ms. Roberts did almost cry uncle. Then she received a grant from the Pollock-Krasner Foundation, which she said “allowed me to eat.”

Then in 2017, things took a meaningful turn: in the span of just a few months, Ms. Roberts’s work appeared in New York at the Volta Art Fair, the Fort Gansevoort gallery and the Studio Museum.

Major dealers took notice, including Stephen Friedman in London and Susanne Vielmetter in Los Angeles, both of whom now represent Ms. Roberts. Her first visit to Ms. Roberts’s studio, Ms. Vielmetter said, echoed her experience with Mickalene Thomas, Nicole Eisenman and Wangechi Mutu: “There was no question about how I felt: This is very, very important work.”

While it can take artists time to gain leverage in their careers, Ms. Roberts has already been making clear demands, namely that she wants her work to go to museums, where children who look like her can be inspired by her story.

And she is allowing the virus crisis to influence new paintings — gravitating toward black backgrounds, for instance, instead of her usual white; and using the time for self-reflection.

“This virus has made us scared of other people,” Ms. Roberts said. “Where we used to make eye contact and meet people, now we want to be in the shadows. We don’t want people to see us.”

But Ms. Roberts’ work is all about wanting to be seen. “Allowing people to be in my presence, to feel what I feel when people make comments about my hair or my body,” she said. “While I want to be in the chorus of black women talking about black womanhood, I also want to have my own solo voice.”