A D.I.Y. Dance for Your Home, From Yvonne Rainer 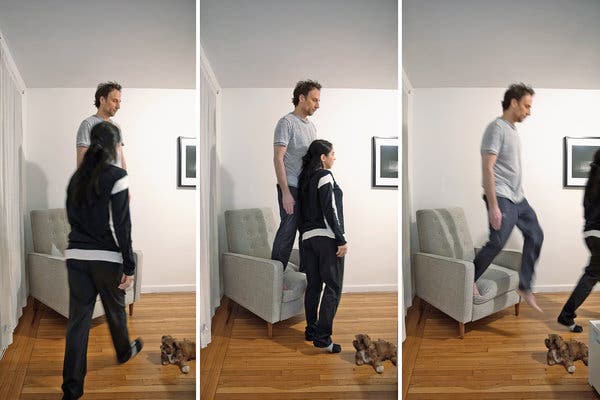 The venerated choreographer invites you to try “Passing and Jostling While Being Confined to a Small Apartment.”

Like many people around the world, the venerated choreographer Yvonne Rainer isn’t leaving her apartment much these days, other than to do laundry in the basement. But that hasn’t stopped her from making dances.

I know, because her latest effort is my fault, you might say. I had asked Emily Coates, Ms. Rainer’s frequent collaborator, to guest teach some of Ms. Rainer’s choreography to the students in my dance history class at Yale. When we learned that the class would suddenly be online only, Ms. Coates asked Ms. Rainer for a situation-appropriate adaptation, and she supplied one. She calls it “Passing and Jostling While Being Confined to a Small Apartment.”

It’s a dance history exercise, but it occurred to me that it might double as a diversion for people now cooped up at home; it’s something that anyone can attempt, carefully. Ms. Rainer agreed. So here I can present her first dance for the socially isolated.

What she adapted comes from “Terrain,” her first long dance, made in 1963. Ms. Rainer and some friends had recently founded Judson Dance Theater, a groundbreaking group that was questioning assumptions of what dance could be. One important aspect was the inclusion of everyday activities and gamelike tasks, often organized in detailed lists and charts, later called scores. (You can find many of them in her book “Work: 1961-73,” just republished by Primary Information.)

In one section of “Terrain,” for example, the performers could choose between two activities: walking and standing still. This is the section that Ms. Rainer has adapted for current circumstances and confined spaces.

The rules, as she recently described them over email, are fairly simple. You can walk, in any direction, or you can stand. Assuming there are two or more people, a person who stands must remain stationary. Someone who chooses to walk can walk as close as possible to the standing person without touching; that’s “passing.” Or the walker can choose to bump, lightly, into the standing person; that’s “jostling,” and it can free the standing person to get back in motion.

Ms. Rainer has added other options. If a stable, lightweight chair is available, you can sit or stand on it. A walker might also bump a stander into sitting. Or two strong walkers might carry a sitter enthroned in a chair. Or someone sitting in a chair could be toppled.

“If you are bored with walking around,” Ms. Rainer added, “you can stand on the bed.” Or walk across it, without breaking stride. The same goes for “couch, table and overstuffed pieces of furniture.”

If you’re alone, there are still options. Choosing to walk solo, you might jostle a piece of furniture. You might wrap your body around that furniture or pick up and put down objects or, say, wash your hands — never too often now — all while maintaining a steady walking rhythm, which, Ms. Rainer emphasized, is “the mainstay of the whole enterprise.”

“Once you stand still, it’s over,” she said. But that’s only one option; she’s supplied another to get you out of that rut. Although the score, like much postmodern dance, doesn’t require any musical accompaniment, you can respond to noises in your environment. “You can decide on several verbal cues from the radio or TV to put yourself into motion again, like ‘virus’ or ‘pandemic.’” The high frequency of such cues should prevent extended stalling.

Avoiding boredom is one reason to have options. That was true in the Judson days too. In the original “Terrain,” the walking and standing contrasted with the more athletic and conventionally virtuosic moves of other dancers in the piece. The walking-and-standing idea was, in Ms. Rainer’s words, an “unexpected intervention,” a little “fly in the ointment.” It was a way of disrupting expectations: a core goal in all of Ms. Rainer’s work.

In this adaptation, she explained, the “repetition of the walking figure is disrupted by the apparent attempt of the performer to use unusual, inexpedient maneuvers to negotiate a bulky piece of furniture.” If you find that disruption funny, that’s entirely consistent with Ms. Rainer’s aesthetic.

But the repetition — the steady walking rhythm, the not breaking stride — is still important. It’s a version of the “uninflected continuity” that Ms. Rainer introduced in her seminal 1965 work “Trio A,” connecting many disparate actions with the same weight and emphasis, the same even level of energy. As much as Ms. Rainer’s 1960s work avoided conventional expressions of virtuosity, like superhuman leaps and strings of turns, this “uninflected continuity,” was, she said, “a new possibility of virtuosity.”

It still is, and it’s harder to pull off than it might seem, even in the starter form of this adapted score. But it’s true to the spirit of Judson and to Ms. Rainer’s love of “unenhanced physicality” that anyone might try it.

The score does involve physical risk, so Ms. Rainer advises caution. She herself hasn’t attempted the new version. “At age 85, I doubt if I could clamber onto and off a bed or sofa with the agility that my score demands,” she said. “But just let me loose on the street!”

Ms. Rainer doesn’t mind if you make your own adaptations. Just “make sure the rules are clear and strict so that you can stick to them without running amok,” she advised. Most important, she said: “Have fun.”

If you film yourself doing the dance, post a link to your video in the comments (Twitter or Instagram work best), or email a link to thearts@nytimes.com. Please make sure to adjust your privacy settings to make the link visible to people outside your network. We may include it in a follow-up article.