A Childhood Crush, Updated for the 21st Century 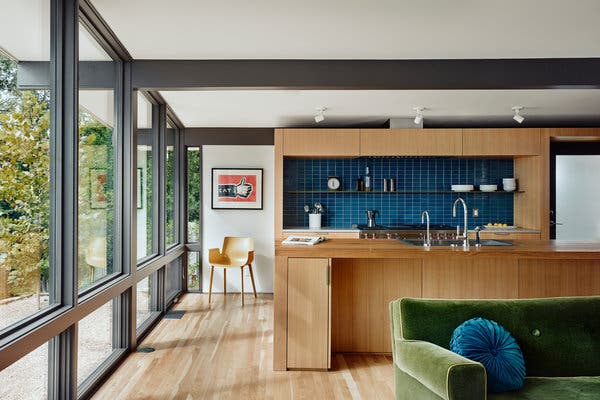 As a child in Austin, Texas, he admired the house from afar. As an adult, he made it his own.

Even as a child, Joe Malina admired the midcentury-modern house down the street.

His family lived in Austin, Texas, a few doors away from the home, a long, low composition of wood and glass with a gently pitched roof, perched on a limestone base at the top of a steep slope.

But in the 1990s, his thoughts shifted away from his old neighborhood as he moved to Portland, Ore., where he pursued a career as a digital colorist for films and commercials and met his wife, Marianne. It wasn’t until the couple relocated to Austin in 1999 and had a son, Milo, now 12, that the house became a source of fascination again.

“My parents still lived in their house, which had a pool,” said Mr. Malina, 50. His sisters also lived nearby.

“Pretty much every summer afternoon we’d come with our kids and swim,” he said. “We’d drive by this house on the way home and think, ‘That’s a cool house.’”

So when it was listed for sale in 2013, the Malinas immediately set up a showing.

“When you walk in the front door, you just see this wall of windows looking out into trees, and it’s one of the most peaceful, amazingly therapeutic experiences,” said Ms. Malina, 49, the president of the advertising agency GSD&M. “Everything about this house, at inception, was perfect.”

Of course, much had happened to it since it was designed in 1956 by the architecture firm Fehr and Granger. An ungainly addition had been tacked on for an expansive new master suite, the wood paneling had been painted and wallpapered over, the original windows had been replaced and the whole place had a vaguely musty smell.

None of that deterred the Malinas, who bought it that May for $839,000, with plans to renovate.

Rather than immediately breaking out the crowbars, however, they decided to move in first, to get a better sense of the house. They also enjoyed the liberty of living with interior finishes they knew would eventually be torn out.

“Milo was young, and it was so great because he could do whatever he wanted,” Ms. Malina said, whether it was spilling paint in the kitchen or letting the bathtub overflow to transform it into a fishing pond.

After interviewing a number of designers, they found an intellectual match in Nick Deaver, a local architect who was just as interested in preserving the best elements of the house as they were.

“The challenge was that the house is a great example of the architecture of its day, so any moves we made would be set against not harming that which was already there,” Mr. Deaver said.

As the design work progressed, the Malinas realized how much they enjoyed the intimate spaces and proximity to nature that Fehr and Granger had planned in the 1950s — and how much they disliked the master suite addition. So they asked Mr. Deaver to get rid of the addition and return the house to its original footprint.

“We dispensed with that idea of needing some grand master suite,” Mr. Malina said. “The idea of a midcentury-modern house is that the bedrooms aren’t that big because you don’t spend that much time in them. It’s really about being in the communal living spaces.”

Mr. Deaver was pleasantly surprised. “In my more than 20 years of experience,” he said, “very seldom have people come to me and said, ‘I want less.’ They appreciated how a midcentury house could be inspiring and uplifting but, at the same time, could be at the scale of the people inside it.”

That isn’t to say that the goal of the project was to do an exacting restoration of the original 2,680-square-foot design. Although the Malinas and Mr. Deaver sought to retain the overall spirit of the home, they introduced extensive changes to cater to 21st-century living, including opening and expanding the tiny galley kitchen, installing an open staircase made of thick plywood, replacing and repositioning windows, and adding a fresh palette of light oak millwork in place of dark mahogany paneling.

Outside, they clad the house in vertical cedar siding that will weather over time. In the backyard — previously little more than a neglected hill — they added a cantilevered pool, deck and screened cabana.

The Malinas moved out in September 2016 to allow the contractor, Wilmington-Gordon, to begin construction. Two years later, after the renovation was completed at a cost of about $290 a square foot, they moved back in, confident that their home was now true to the original design and also reflected their own personalities.

Restoring and remaking the house with Mr. Deaver, Ms. Malina said, may have been the couple’s most rewarding project yet.

“We put a lot of creative energy into all kinds of things, whether Joe’s working on a film or I’m building a brand,” she said. “But when you actually get to create a physical space, it’s just a totally different experience.”